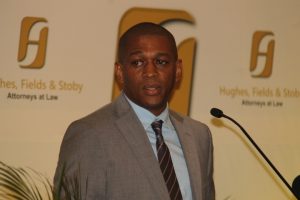 Head of the Ministry of the Presidency’s Department of Energy, Dr. Mark Bynoe.

As debate continues over whether Guyana might have lost millions of United States (US) dollars to ExxonMobil in the development of Liza Phase One,  government here on Friday announced that steps were being taken to reduce controversies in calculating costs.

This announcement was made by Head of the Ministry of the Presidency’s Department of Energy, Dr. Mark Bynoe at the launch of Hughes, Fields and Stoby’s Professional Services in Oil and Gas in Houston, Texas, United States.

“To avoid perverse conflicts and other difficulties the Department hopes to elaborate cost accounting rules for the specific purpose of facilitating control that could be agreed between the parties,” he said to an audience that included leading private sector executives, several government ministers and American Ambassador to Guyana, Perry Holloway.

Dr. Bynoe also signaled that government might hire auditors and craft rules to resolve contentious issues cordially in the best interest of Guyanese and with the “highest degree of integrity and transparency”

“Further, government will be keen on utilizing independent auditors and the adoption of reasonable procedures for addressing differences that could bring potential disruptions to a minimum and allow the smooth flow of operations,” he said.

Dr. Jan Mangal, former Petroleum Advisor to President David Granger, had preferred to see the Natural Resources Ministry review the US$4.4 billion cost before the production licence was approved in mid-2017. Hehas  estimated that if the Liza Phase 1 project could have be cut by 20 percent, that meant that the Natural Resources Ministry had effectively given ExxonMobil U$880 million “for no reason”. The Ministry of Natural Resources has since denied there was any skulduggery or corruption and that it had been guided by the advice of the Guyana Geology and Mines Commission and external contractors, all with Cabinet’s full involvement and approval.

The Head of the Department of Energy also outlined a comprehensive overall of the legislative, regulatory and management of Guyana’s emerging oil and has sector that so far accounts for 4 billion barrels of oil equivalent, even as “all Guyanese” were promised that they would reap benefits from the oil sector.

He said government was taking a “practical and pragmatic approach” to safeguard the interest of Guyanese and develop the best model to govern the oil and gas. That, he said, was because the State and the private sector have limited capabilities at this time to manage the oil and gas sector.

“We must improve our systems of governance and transparency, inclusive of public procurement to reduce the potential for downstream leakages associated with petroleum revenues,” he said. “The Department is keen to ensure that the systems of transparency and governance remain wholesome for all to have an equal opportunity to participate,” he added.

The Ministry of the Presidency official said steps would be taken to regulate the requirement and conditions for exploitation, strengthening contract administration, developing an effective and transparent system for allocating production rights, inclusive of completing a model production sharing agreement (PSA) and adopting effective mechanism for controlling licenses, contracts and operations. •

He hinted that steps are being taken to ensure oil revenues trickle down to citizens. “All Guyanese must benefit from oil and gas revenues and as such, the Department will aim to create systems and work with other agencies to ensure this occurs,” he said. Bynoe did not elaborate, but his comment came just over month after Distinguished Economics Professor, Clive Thomas recommended direct cash transfers to assist very poor Guyanese households in returning their children to school, removing them from child labour and also improving their health.

Thomas has floated a figure of about US$5,000 annually to each poor household.

The Head of the Department of Energy also cited the need to reach out to members of the public, schools, technical institutions, universities, the private sector and others as the debate continues about local content, the Natural Resources Fund and Production Sharing Agreement. Such engagement, he said, would be aimed at preparing them not just for the oil and gas sector but also for first oil and the cash.

“A fundamental tool for enabling the proper administration of the contract would be the drafting and adoption of a comprehensive set of clear and detailed process maps and descriptions, including adequate definition of responsibilities and protocols. The Department is focused on this to ensure the “rules of the game” are well known and thus easier for all parties to participate,” he added.

Government, he said, was also moving to ensure it gets a good understanding of top side and sub-surface mineral deposits by conducting analyses and databases held. Bynoe said focus would also be placed on understanding the global trends in markets, technologies and market structures, inclusive of better economic modelling and forecasting, and varying and modifying a range of assumptions underpinning these models.

He said Guyana is seeking to encourage business, not discourage it, but it must be in a balanced manner where Guyana and Guyanese benefit proportionately, “whether it be in the form of local business sector support, project participation, joint ventures or fulfilling of one’s corporate social responsibility.”

He said a public-private management of the hydrocarbon sector appeared feasible at this time to phase in all that is required.

Guyana expects to begin commercial oil production for the first time in early 2020.