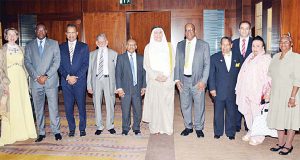 The Guyana ministerial delegation members with some of the Kuwaiti officials.

KUWAIT: Two ministers from Guyana are in Kuwait to appeal for a possible writing-off of debt borrowed from Kuwait around 40 years ago. Finance Minister Winston Jordan and Minister of Public Infrastructure David Patterson hope to get the much-needed relief from the Kuwaiti government. “We had borrowed around $10 million from Kuwait in the 1970s. It was during a time when we really needed help and Kuwait was very generous to reach out and give the money we needed. But now, the amount has grown to about $70 million because of interest. This is the reason why we are here,” Jordan said. The two ministers visited Saudi Arabia before coming to Kuwait.

Jordan lauded his country’s much-improved and long-standing relations with Kuwait. He also urged Kuwaiti businessmen to invest in his country’s growing economy and met the Deputy Chairman of Kuwait Chamber of Commerce and Industry Mohammad Al-Saqer in this regard. “For investors, we will give generous concessions. We are a country almost equal to the UK in terms of size, but not too many people (700,000 plus), so there are huge developmental challenges. We want investors that can help connect different parts of Guyana,” he said.

Guyana is considered part of the Caribbean region and according to Jordan, the country is known as the “land of many waters” because it is surrounded by water. “My country is a melting pot of several races – a land surrounded with forest. I am also very keen to tell our brothers in Kuwait that the Muslim population in Guyana is the fastest growing – it is now about 12 percent,” Jordan said. He added the South American sovereign state offers ample opportunities for investment as a result of its large reserves of natural gas and water resources.

Patterson also said Guyana is open and ready for business, especially for investors from Kuwait. “We are the only English-speaking country in South America, which is good for the business community. We are a rich country in terms of natural resources and minerals. We have abundant water, so agricultural businesses are thriving. Recently, we discovered that Guyana is also rich in oil – in fact in the next two years, the country expects to begin production. Despite this, we are committed to renewable energy and would like to power our country with renewable energy by 2025,” he said.

2018-09-23
Denis Chabrol
Previous: OPINION: Government’s anti-corruption vision was a goose that was cooked on many fronts
Next: AFC, WPA poised to collaborate on proposed direct cash transfers of oil money to poor households