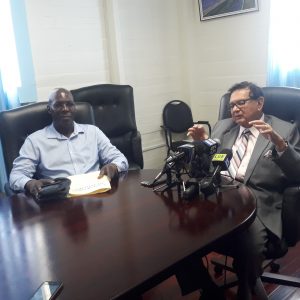 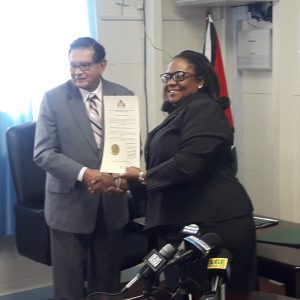 With the LGE slated for November 12, 2018 and the announcement of Commission of Inquiry made less than one week ago, questions were raised about whether the move was aimed at helping the coalition regain real or perceived lost political ground in the municipality.

Garnett noted that the bipartisan-appointed Local Government Commission took office with the input of the President and Opposition Leader. He said the Commission’s work was guided by information at its disposal. “There is no political bias in terms of our work. We sit as a Commission and we take studied action based on what is presented to us,” he said. Garnett said Georgetown was selected based on the “nature and multiplicity of the complaints”, some of which involved Town Clerk Royston King who has been directed by the Commission to proceed on administrative leave from September 21.

Speaking with the media moments after he was sworn in by Chief Magistrate Ann Mc Lennan as Commission of Inquiry Chairman, Retired Justice Cecil Kennard acknowledged that the Inquiry might be seen against the background of the Local Government Elections but he assured there was no need for concern. “I don’t  have any reason to fear that it will in any way influence the election one way or the other because what we are dealing with is one municipality only, that is Georgetown. We are not dealing with other municipalities,” said Justice Kennard, a former Chancellor of the Judiciary and former Chairman of the Police Complaints Authority.

The Local Government Commission unanimously decided in April, 2018 to hold the Commission of Inquiry and Kennard said he was approached in June but was not available until now.

Justice Kennard pledged to conduct a a quick inquiry once the witnesses come forward in a “speedy manner.”

He has until October 31 to submit his report, but officials said there is room for extension.

The Kennard Inquiry is expected to focus on, among other issues, the award of contracts; non remittance of income tax, social security and credit union dues from workers salaries, and the handling of a no-confidence motion by then Sherod Duncan against King.