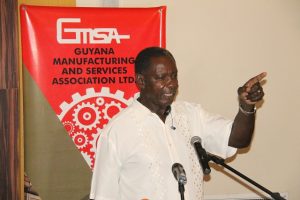 General Secretary of the Guyana Trades Union Congress, Lincoln Lewis addressing a forum on the Sovereign Wealth Fund that was held by the Guyana Manufacturing and Services Association on 13th September, 2018.

The General Secretary of the Guyana Trades Union Congress (GTUC), Lincoln Lewis on Thursday called on decision-makers to go to ordinary Guyanese in their communities to discuss how the emerging oil sector can lift them out of poverty, and and he cited the need for at least 43 of the 65 parliamentarians to pass pro-development budgets.

Lewis insisted that the Parliament must control how monies are allocated in the National Budget instead of merely one party using its simple majority to pass the Appropriations Bill. “We must change this law where every time we have a National Budget, it’s by simple majority it’s passed there. We must get a two-thirds majority. Let the parties in Parliament work to put plans in place to see how this money…that programmes are there that everybody benefit. We can’t continue like this,” he said.

Lewis contended that government appeared to be violating Guyana’s constitutional provisions on inclusionary democracy by failing to consult grassroots communities on the Sovereign Wealth Fund (SWF). Expressing concern at Ministry of Finance Budget Director, Sonya Roopnauth’s remark that worldwide Finance Ministers play roles in SWFs, he suggested that there were numerous countries where oil revenues did not benefit the poor directly. 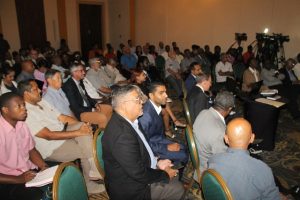 Attendees at the Sovereign Wealth Fund forum organised by the Guyana Manufacturing and Services Association.

“We can’t continue to be a rich country with poor people. This thing has to change,” he said in issuing a stirring call for people involvement in drafting development plans for their own development alongside the SW. “This plan has to be tied to a developmental plan; not a plan made by every party that enters government (but) a developmental plan made by the people to say where we are going to put this money,” he said.  Worried that whenever a party is elected to govern it crafts its own selfish agenda “to run elections and run roughshod over each other”, Lewis said a plan must be developed, ratified and implemented by any party that is elected.

He railed against the Ministry of Finance deciding how much monies must be allocated to development instead of reaching out to communities, a claim that was debunked by the ministry’s Budget Director, Sonya Roopnauth. She informed that the budgetary process begins with consultations with government ministries, the 10 regional councils and neighbourhood councils. “They bring their priorities within their strategic plans to the Ministry of Finance as a submission for discussion and inclusion in the budget. The only determination that has to be made by the Ministry of Finance is about what we can afford in the context of a fiscal envelope,” she said. The Finance Ministry, she said, does not determine priorities because those are expected to be in keeping with the National Development Strategy.

Roopnauth acknowledged that several of the administrative regions do not have strategic plans, but steps were being taken to do so.

Rebutting, Lewis said the Guyana Constitution provides for the regions to prepare their plans to be funded by Central Government. “It is not for Central Government to determine what the plans are. It is the other way around,” he said.

Alluding to criticisms of Distinguished Economics Professor, Clive Thomas’  recent suggestion of direct cash transfers of oil revenues to poor Guyanese, Lewis said “it is an insult to the Guyanese people to tell them if you give them money they will not work, but apart from being an insult it’s an encouragement to politicians to do what they are doing- to discriminate in favour of one group against the other”.

Executive member of the Private Sector Commission, Ramesh Persaud agreed that parliamentarians would have to develop national priorities to be financed by the SWF.