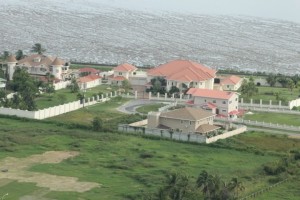 A former People’s Progressive Party (PPP) cabinet  member on Wednesday said he told police investigators that top government officials were allocated lands at PradoVille 2 (Goedverwagting-Plaisance) because of the deadly crime wave at the time that had resulted in the shooting death of then Agriculture Minister, Satyadeow Sawh.

Former Minister of Public Works, Robeson Benn said he told agents of the Guyana Police Force’s Special Organised Crime Unit that security for the President and the Cabinet at the time was a major issue.

“I did point out that overall at a time when the ministers were being attacked, we had the history or the recent issue of a minister of the government, Minister Sash Sawh, being assassinated along with members of his family, that the security of the senior members of the government and senior personages was an overriding issue and it had to do with the stability of the country to make sure that the President and other members of the Cabinet, that they would want to be secure and safe and whatever was done had to be done,”  said Benn who does not have a property at PradoVille.

Attorney-at-Law, Priya Manickchand, who is Benn’s lawyer, said they were asked about the same questions as before. Those included the process for vesting properties, valuation of the lands, cabinet decisions on who should have been allocated lands and the vesting of lands to the Central Housing and Planning Authority.

Manickchand, who served as Minister of Human Services and Minister of Education, said she was questioned on Tuesday by SOCU investigators. She said all then persons, who were Cabinet members, have been asked to report to SOCU.

Sawh and two of his siblings were gunned down in April 2006 shortly after they had returned to the minister’s La Bonne Intention (LBI), East Coast Demerara home. Records show that it was not until July 2010 that directives had been given to survey and paal off the lands which were sold in September, 2010.

The crime spree dated back to February 2002 when five dangerous prisoners had escaped from the Georgetown Prison, spawning the emergence of heavily armed gangs that had operated mainly from Buxton Village, East Coast Demerara from where they had staged numerous robberies, killings, kidnaps and massacres. That violent crime wave largely came to an end in August 2008 when gang leader, Rondell ‘Fineman” Rawlins was shot dead by security forces.

The questioning of the former Cabinet members came less than one week after well-placed sources signaled that former PPP government officials would be charged in the coming days for lands acquired at PradoVille.

“I am absolutely shocked at the allegation that was put to me that I conspired with the Cabinet to have lands transferred to the Central Housing and Planning Authority in respect of Sparendaam,” Benn added. He said he was shown unsigned documents and others which he could not authenticate. “It was pretty messy and untidy in respect of these issues”, he said.

Manickchand contended that PradoVille 2 was being targeted because Jagdeo lives there and coincides with top party leaders holding recent meetings in Berbice ahead of the planned November 12, 2018 Local Government Elections. “This has only to do with an attempt to decapitate the PPP and pull down its leaders and interfere with its ability to lead and that’s all it is, it’s a political persecution,” she said

Former Minister of Trade and Tourism, Manzoor Nadir said he exercised his option to remain silent because he was cautioned that anything he said could be taken against him.

The applicants listed the following known supporters of the People’s Progressive Party and government employees who benefitted from “government’s largesse” :  Andrew Ranji Bishop, Florrie Loretta Ramnauth, Rajendra Singh (former Chief Executive Officer of the Guyana Sugar Corporation ), Safraz Khan, and Ramesh Dookhoo who each purchased 0.3005 of an acre for GUY$1,502,000. Others are George Hallaq and Nada Hallaq who paid GUY$5 million for 0.8422 of an acre, and Future Developers International(Guyana) Inc whose sole director is Dr. Rajendra Singh purchased 0.5534 of an acre for GUY$3 million.