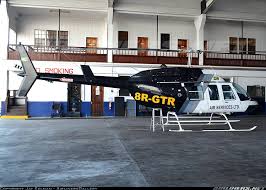 An Air Services Limited’s (ASL) helicopter engine disintegrated as the aircraft was about to land at an interior location earlier this week, authorities confirmed Wednesday.

Director-General of the Guyana Civil Aviation Authority (GCAA), Retired Lt.Col. Egbert Field confirmed that the incident occurred, but no one was injured.

“It (helicopter) lost power and an engine on the approach. The number two turbine disintegrated but they were able to land safely. There were no injuries or casualties. After it landed, the pilot had to do some extinguishing,” he told Demerara Waves Online News.

The chopper was being piloted by a Guyana Defence Force pilot.

The GCAA says it has ordered an investigation into the incident. Lead investigator, Paula Mc Adam has taken over responsibility for the probe, even as efforts were being made to secure the aircraft at the scene.