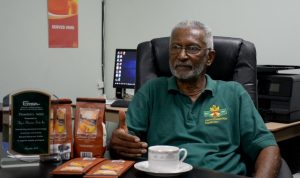 A heady, distinctive fragrance drifts invitingly up to Louis Holder’s Liliendaal office. It’s the smell of coffee—but definitely not any ordinary kind.

The invigorating smell comes from an exquisite brand of locally-produced ground coffee. Its rich aroma exemplifies its intriguing story, one that interweaves long forgotten history with a man’s love for his country and his determination to succeed.

This unique brand of ground coffee is made from beans harvested in the Pomeroon region of Guyana’s interior for Amy’s Pomeroon Foods. Louis Holder is Chief Executive Officer and, under his leadership, Amy’s has become one of the most resilient agro-processing businesses in the nation, holding on resolutely in the face of multiple challenges.

Holder knows a lot about coffee. And, in his view, coffee in Guyana has a rich history and a heritage that should be preserved.

“We did some research and found that our coffee grown here is the oldest coffee in the New World, having been introduced by the Dutch…the coffee you are getting today from the Pomeroon is basically the coffee that evolved from the original Typica [Arabica] variety that was introduced in 1721 by the Dutch,” he explained.

“Basically what happened to coffee is that by 1810, British Guiana was one of the largest exporters of coffee in the world having exported 22 million pounds that year.  But the Dutch grew Typica on low elevations, on the coastland of Guyana, whereas Typica favours high elevations. As a result of that, the yields of the plant dropped,” Holder said.

Consequently, costs rose and it became increasingly difficult for coffee-plantation owners to sell their coffee at competitive prices on the world market. Over time, most switched to sugar and the coffee industry went into steep decline.

There was one exception—the Pomeroon- which became the last stronghold for local coffee growers, mainly because that region did not have large plots of flat land suitable for sugar cultivation.

This holdout by Pomeroon coffee growers continued into this century, but farmers began to suffer heavy losses as demand declined and Guyanese turned more and more to instant coffee.  Coffee growers then started to cut down their coffee plants.

Holder feared that the unique cultivar of the Typica Arabica coffee plant would be lost forever, and along with it, one of the most sublime coffee flavours the world has ever known. “I just couldn’t let that happen…” he said.

Holder set about laying the groundwork to start his own coffee business. His vision was clear and simple: produce an excellent quality product using the Pomeroon coffee cultivar with the objective of replacing five percent of the foreign coffee imports by the first year of operations. His business went into production in 2015.

Most manufacturers go through a two-step process to produce ground coffee, but Holder opted for the longer and costlier five-step process known as the “wet process” which develops the best flavor.

Coffee cherries —the fruit picked from the coffee tree—are put in a water-bath; defective ones float to the top and are removed; the rest are put in a ‘pulper’ to remove their thick skins. What remains is a parchment covered by mucilage (a sticky substance). The beans are put in another water-bath and after three days the mucilage, which contains sugars, breaks down into alcohol and is removed through a process of agitation.

Next, the parchment is sun-dried before being placed into a ‘huller’ to remove the shells, leaving behind coffee green beans.  Using modern technology, the green beans are roasted and ground into coffee granules at the Liliendaal plant. To maximize flavor, Amy’s Coffee aims for the granules to have a medium-dark roasting profile.

The more finely ground the coffee is, the more intense the flavor, although Amy’s produces coffee ‘grinds’ of varying degrees of coarseness,  according to customers’ specifications.

Holder is committed to pushing brewed coffee in the local market and maintains that top-notch coffee houses worldwide do not consider instant coffee to be real coffee.

In his view, the only advantage instant coffee has over brewed coffee is “convenience”, because it can be made more easily and quickly. “Ground coffee will take a few minutes to brew, but the taste is the real deal,” he explained.

“That is the real taste of coffee,” he insisted, pointing out that Instant coffee is made by brewing coffee which is then freeze-dried and crystallized. “You lose all the flavour; you lose the aroma; you lose a lot of things,” he lamented.

He believes it is unfortunate that, in recent times, many Guyanese have lost their appreciation for brewed coffee. That is why he thinks his campaign to ‘bring back brewed coffee’ is vitally important.

“Guyanese think coffee should taste like instant coffee and we have had to try to wean them off of instant by giving away 2000 French presses…” he said. His company also gave away several 40-cup percolators free of charge to commercial customers and Government Ministries and has been visiting these businesses and organizations to conduct free sample-tasting exercises.

Despite his efforts though, business has not made the inroads he expected and, in fact, has remained virtually stagnant from the time of production to now.

He started out with a conservative estimate that the business would penetrate the foreign imports market by five percent by the end of the first year of production. But three years later, Amy’s coffee is only at 2.2 percent of foreign imports.

“I think the reason is the Guyanese public has a…concept of local products that it is one of low quality so they have this preference for foreign imports. The problem with that is that our balance of trade is in the negative region. This is not sustainable. This country cannot continue with a negative balance of trade because it will lead to inflation, high interest rates and economy crashing. We need a concerted effort to promote local products,” he pointed out.

Holder noted that the United States of America enacted a buy local law since 1933 specifying that tax payers’ funds cannot be used to buy foreign products, making it imperative for Government expenditure to go towards the local products of that country.

He noted that the United States has also been putting tariffs on imports to make their locally produced goods more attractive.

Holder emphasized that unless there is legislation that causes tax payers’ funds to be spent only on local products, this will not happen.

“We have a good product…all the major coffee houses in Guyana use this product…” he said. “It means that this is a good product that they have stumbled on and it is reasonably priced…major hotels…use our coffee. But we cannot get the consumers, we haven’t found the consumers are onboard yet…” he added.

Furthermore, Holder is concerned that local products do not get sufficiently prominent exposure on supermarket shelves.

Holder said he is also hoping to expand his operations to produce chocolates. He already produces mocha, which is coffee flavoured with chocolate. Moreover, he plans to introduce a powdered coconut milk to market alongside Amy’s Coffee. “We tried it and it makes an excellent flavor,” he said.

Another plan he has for the near future is to produce chocolate-flavoured coconut butter, similar in consistency to Nutella.

To convince Guyanese consumers that local products are of good quality and deserve support, he suggested that Government and the private sector should launch a strong campaign to promote the ‘buy-local’ concept among Guyanese.

Holder said he participated in all of the Guyana Manufacturing and Services Association’s UncappeD exhibitions and finds it useful to introduce his product to the various regions.

Market Place UnCappeD has so far been held in Regions Three and Four. The next UncappeD is slated for Region Six on October 28 at the Albion Community Centre Ground.

Even though Holder has not reached his production goals, he continues to stand strong as an agro processor, driven by his need to do something positive for his country. All of the company’s shareholders stand with him in this. “We see the challenges as temporary…these will be overcome,” Holder asserted.

His confidence is priceless. It might decide the fate of an age-old industry, a patriotic agro-processing business —and a rare coffee plant.