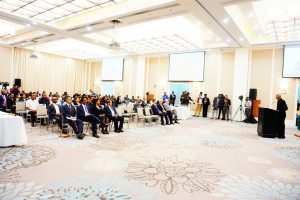 President David Granger addressing the opening of the 50th meeting of the Council of Legal Education at the Marriott Hotel, Georgetown, Guyana. (photo by Carl Croker)

“The Council, however, should seek new ways of improving access to and the delivery of affordable legal education to all corners of our Caribbean,” he Friday.

Issuing the call in his feature address to the opening ceremony of the Council of Legal Education meeting on Friday at the Marriott Hotel in Kingston, Georgetown, he urged the regional body that manages three law schools across the Caribbean to maximise the use of technology to deliver legal education.

“These measures should include, if necessary, embracing new technologies which support their objectives,” he said.

In apparent reference to the annual quota of 25 Guyanese who graduate from the University of Guyana with Law Degrees and are eligible for automatic entry to the Trinidad-based Hugh Wooding Law School, the Guyanese leader  called for equality of access to legal education. “We should ensure also that non-discriminatory admissions to the regional law schools are made available. Guyana’s need for a greater number of trained legal practitioners cannot be satisfied by the present quotas imposed by regional law schools,” he said.

Chairman of the Council of Legal Education, Senior Counsel Reginald Armour has said there are gaps in the feasibility study provided by Guyana’s joint venture partners in the proposed Joseph Haynes Law School and no curriculum has been submitted. However, Attorney General Basil Williams has said those gaps were being addressed and Guyana has already agreed that it would use the curriculum that is being used by the Hugh Wooding Law School.

As Guyana edges closer to the realization of its own law school, the President noted that legal education is essential to establishing a corps of legal professionals, emphasizing that quality before the law and the sanctity of human rights can be guaranteed only with the enactment of justice.

“Legal education programs are aimed at producing attorneys,’ men and women of integrity, intelligence and impartiality. These programmes are aimed at inculcating virtues in the public service and values of social responsibility”. The president said.

On the heels of Guyana’s move to establish the Joseph Haynes Law School, the head of state told the gathering that Legal education is to satisfy the need for qualified legal practitioners to meet the demands of changes in the society, to promote access to justice and populate our legal system.

The general objective of these meetings is to place emphasis on the law schools and how they relate to the Caribbean community.

The meeting was attended by the Heads of the Judiciaries, Attorneys-General, and Heads of Bar Associations from all the Caricom Countries. Also present were a representative of the Caribbean Court of Justice and the Principals of the Hugh Wooding, Norman Manley, and Eugene Dupuch Law Schools.

Prime Minister Moses Nagamootoo and members of the Diplomatic corps were also in attendance.

The ceremony was chaired by Mr. Reginald Armour SC, the Chairman of the Council of Legal Education (CLE).

Guyana hosted the CLE in the years 1975, 1981, 1987 and 1994, and played a pivotal role in its formation in 1971, whereby it is party to the Agreement Establishing the CLE together with CARICOM Member States Barbados, Dominica, Grenada, Jamaica, Trinidad and Tobago, the Universities of the West Indies and Guyana.

The Council of Legal Education Meeting will continue on September 08, 2018.

(by Carl Croker with editing by Denis Chabrol)