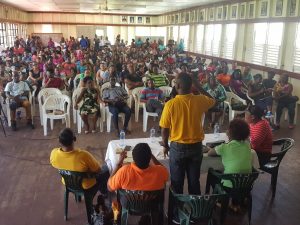 GTU President Mark Lyte meeting with teachers during the strike.

The Guyana Teachers’ Union (GTU) was prepared to accept a 20 percent salary increase for 2016, but would have to accept whatever the arbitration panel decides based on evidence to be submitted by government and the union, union President Mark Lyte said.

“At the time, the union had thought about twenty percent as being a reasonable offer on the 2016 salary, but that being said this is academic information I’m giving you now because whenever it goes to arbitration, it is out of the hands of the union or the Ministry of Education and it rests in the hands of the arbitrators so us saying what percentage we would like to have is no longer a factor,” he told a news briefing at the GTU’s Hall, Woolford Avenue, Georgetown.

Lyte said after government and the union decides on the composition of the arbitration panel, he expects the process to take at least two months before a decision is made. The union is expected to propose representation on the three-member panel includes someone from one of its affiliates in the Caribbean.

The GTU said the arbitration panel would be expected to decide on a “just remuneration and other benefits” in  a multi-year package from 2016 to 2020, some adjusted salary scales and increased clothing, risk and other allowances.

With the panel expected to examine government’s “books” to determine what level of salary increase the government could afford, Lyte pointed out that the decision by the arbiters  would be binding on the teachers and government. “The fact that we are going to arbitration, the decision of the arbitration panel is final,” he said.

The government had offered GY$700 million to pay teachers a salary increase for 2018 and GY$200 million to adjust several salary scales in a process called de-bunching.

After teachers resume duty fully on Monday, September 10, 2018, the three parties- Labour Department, Ministry of Education and the Union- are scheduled to meet on Tuesday to agree on the composition and terms of reference for the arbitration panel.

While “we would have been comfortable with twenty percent; when we did our calculations that would have been reasonable”, the GTU President pointed out that the union could not have aimed and called for 20 percent but had to give itself some negotiating room.

The almost two-week old strike peaked on Wednesday to as much as 6,000 of the 10,000 educators having been off the job, before the Ministry of Education buckled to the GTU’s demand for the pay dispute to be sent to arbitration.

The GTU President said the Chairman of the arbitration panel should be someone who could “provide a neutral balance” between the union and teachers, consider what the economy could “afford and offer” as a “livable” wage.

“The challenge is finding someone who will not be politically influenced, someone that will bring that neutral balance to the team. Of course, from the government side and the other side you will have people with their own perspective,” he said.

The agreement for the avoidance and settlement of disputes provides for the GTU to fund some of the cost of the arbitration process.

2018-09-07
Denis Chabrol
Previous: Guyana not yet ready for local law school- Legal Education Council
Next: Scrapping jail terms for marijuana possession contradicts ‘no smoking’ agenda but all smoking will be discouraged- Granger