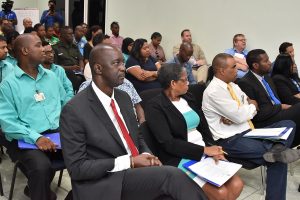 The Minister was, at the time, speaking at the closing ceremony of the third CORS Network Informative workshop held in the Training Room of the Guyana Lands and Surveys Commission (GLSC). The CORS Network, which is a network of high accuracy Global Navigation Satellite Systems (GNSS), eliminates the need for on-the-ground markers and referencing points during land surveys.

The GLSC has been collaborating with United Kingdom (UK) based company, Ordnance Survey on this initiative.

The three-day workshop, conducted for representatives of Government agencies and the business community, was held to sensitise the stakeholders to the establishment and operations of the CORS Network in Guyana.

“The Government regards the establishment of the CORS Network in Guyana as a very important development which will enable the Guyana Lands and Surveys Commission to fulfill one of the main aspects of its mandate, which is to execute… geodetic, topographic, hydrographic, and cadastral surveys in relation to the land and water resources of Guyana. It will also help the [GLSC] to gather information, set targets and indicators, and develop sustainable Land Use Policies that are in line with the implementation of our Green State Development Strategy and the establishment of Guyana as a ‘green’ State,” Harmon was quoted as saying in a statement issued by the Ministry of the Presidency. 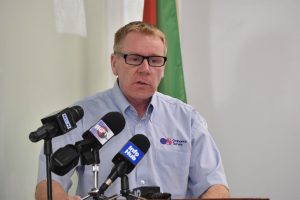 The Minister described the project as an important one that is “vital to our Government’s vision of ordered and sustainable land use within the framework of our Green State Development Strategy as the mechanism for the establishment of our ‘green’ economy and the ‘green’ State of Guyana.”

Meanwhile, Manager of Information Systems at the GLSC, Mr. David Cole spoke on the benefits of a CORS Network. “The CORS Network is essentially a type of national information resource that can significantly enhance our production and help us to bring about a 21st century digital innovation. The CORS Network is a crucial component in several current, international, and national development efforts in Guyana.” 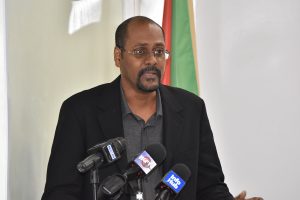 Mr. Cole acknowledged the work done by GLSC’s Commissioner, Trevor Benn in ensuring that   geospatial information management is a priority for the Commission.

“This just [gives] a reminder to us all… how important this piece of work actually is to the country of Guyana. Ordnance Survey is committed to achieving the goal of getting the Guyana CORS Network fully operational and to enable the GLSC to run and operate a world-class CORS Network that meets its user’s needs. It is our task to make that possible… Prepare yourselves. Prepare your teams and your organisations to be challenged, excited and inspired by this change,” Mr. Gilbert stated.

The Government of Guyana in June, 2018 signed a $93M contract for consultancy services to establish the CORS Network. Two other CORSNET workshops were held previously for Government surveyors and independent surveyors.