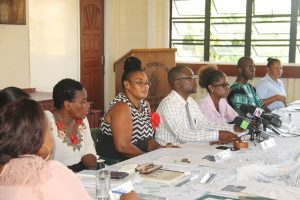 Executives of the Guyana Teachers Union briefing the media on Tuesday.

The Guyana Teachers’ Union (GTU) on Thursday threatened to prolong the strike and force government into arbitration if it refuses to return to the bargaining table and consider using the 40 percent demand as a starting point for which to negotiate lower increases.

The GTU decided that it would be going to Wednesday’s  meeting with the Ministry of Social Protection’s Department of Labour to demand arbitration on the basis that the Labour Minister, Keith Scott and Chief Labour Officer, Charles Ogle have compromised themselves  by urging the union to accept  government’s offer of GY$700 million ball-park figure and GY$200 million for adjusting some salary scales.

“He (Scott) made several pronouncement pleading with the union to accept the offer and that in itself for us is a compromise if the minister is going to call us to agree on something further. At the second meeting, minister did not attend but we had the Chief Labour Officer who also pronounced on the union, pleading with the union to sign off on what was agreed already so we felt that their position has been compromised even before we raised the stage of conciliation,” Lyte said.

With just about GY$9 million in its bank account, the union nevertheless expressed confidence that it could pay 50 percent of salaries to about 3,000 striking teachers as relief in a move aimed at prolonging the industrial unrest. There are about 7,000 unionised government-employed teachers.

Lyte again rejected the offer of ball-park figures because that would amount to an increase by GY$5,000 per teacher for one year or GY$1,666 per teacher if calculated for five years.

Meanwhile, GTU General Secretary Coretta Mc Donald said teachers, who break the strike and assume duty, would have to take full responsibility for anything that goes wrong with students or school properties. “Let me make it know that when you go to school, if you have three teachers there, then the responsibility is that of the three teachers present to ensure that the people’s children are taken care of and if anything should happen during that period then you might have to go to the Minister of Education to seek recourse in whatever would have happened there,” she said.

The GTU said the Ministry of Education and the Guyana Police Force have been refusing to take schools’ keys from head teachers and, according to Mc Donald, “if anything goes missing you will have to account for it”.

The Ministry of Education has been mobilising trainee and retired teachers to work at schools where teachers do not turn up for work from next Monday.