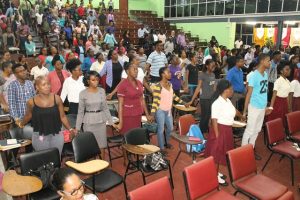 A section of the new University of Guyana students at the orientation session held at the George Walcott Lecture Theatre on 27th August, 2018.

University of Guyana Vice Chancellor, Professor Ivelaw Griffith has warned new students against stealing other people’s works and reproducing it as theirs to help create a culture of honesty as the country is poised to earn huge revenues.

Addressing an orientation for the freshmen and women at the George Walcott Lecture Theatre on Monday afternoon, he warned them against plagiarism which is a global problem. “You are not allowed to plagiarise. Taking somebody else’s work, putting your name on it…That is not habituating excellence where you earn it so the value you want to practice is the value of integrity,” he said.

Griffith did not have any statistics about the number of reported cases of plagiarism. He said the institution has been using technology, such as https://www.turnitin.com/ to intercept and penalise plagiarists in an age where it is easy to copy other’s works from Google. 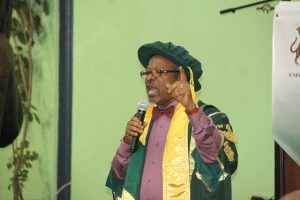 “Technology makes it easy for people to plagiarise and so what we have begun to do now is to use technology to help to combat that plagiarism issue but it is partly an educational process,” he said, adding that the Library has been cautioning students against stealing other people’s works.

The Vice Chancellor stressed that it was important to stamp out stealing other people’s works and passing them off as theirs as part of efforts to reduce temptations to steal oil industry-related wealth. “For me, particularly in a society where we are coming into some big money; if we don’t practice some values, integrity you can get carried away with just doing one illegal thing- taking somebody’s work- then you feel ‘ok’  to do something- take somebody’s money- so for me…this university needs to be practising some values and integrity is one of the values,”