‘Guyana Airways Corp. Inc.’ plans to take legal action over use of name 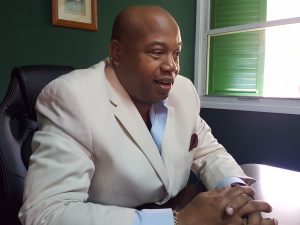 Legal action is likely to be taken against government for removing the privately-owned Guyana Airways Corporation Inc. (GAC) from the Companies Register two years after the entity was duly registered because the name is identical to two previous companies.

“Every entity had an opportunity to object to the name, Guyana Airways Corporation Inc; within that six-month period after we received the registration,” Colin Abrams, Chief Executive Officer of the entity which continues to still use the name on its building and other branding materials.  He remarked that so far government has not filed an injunction restraining him from using the name and logo which are identical to those that had been used by the now defunct state-owned Guyana Airways Corporation.

Abrams, who was one of several directors of the GAC Inc; said the setback has prevented him from  going ahead with his application process including the submission of manuals and the eventual hiring of more than 80 flight attendants and 15 pilots. He confirmed that those prospective employees, who are part of the hiring pool, have since been told to put a brake on joining the entity because with the name humbug, he could no longer send many of them to Miami, Florida for training.

Demerara Waves Online News was told that just over one week ago, directors of the entity consulted a lawyer to determine the next step. 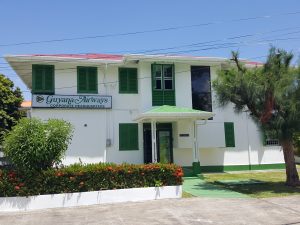 Abrams told the media that he has so far spent millions of United States dollars in preparing the groundwork for the carrier which he hoped would eventually provide daily flights to Cuba with connections to other destinations.

Responding to questions about the possibility of using another name, he said “this will be a monumental task and financial setback to alter” after two years ago. He said copies of the business plan had been dispatched to the Ministry of the Presidency, Ministry of Business and Guyana Office for Investment (GO-Invest).

He claimed that the decision to de-register GAC was politically motivated, but at the same time he did not support his contention. “This obviously political, something political attached to it because nothing occurs in a vacuum,” he said. “It is absolutely totally illegal what they did. It is absolutely, totally, utterly illegal what they did but there are some forces out there and they could do whatever they do,” he added.

Defending his use of GAC, he said after the airline had been taken over by private investors and changed the name to Guyana Airways 2000, it later also became defunct and now does not have any directors. “Somebody didn’t do their due diligence within that  window, that six-month period,” he said.

Guyana Airways, he said, 10 days ago received correspondence from the Guyana Civil Aviation Authority (GCAA), stating that it received notification from the Companies Registry and asked that it submit a new pre-application under a new name.

Abrams., a former medical doctor, said he retired from Delta Airlines two months ago after serving that American carrier for 19 years.

Asked why he decided to use Guyana Airways, he said the name was available to anyone who wanted to use it. “It wasn’t a secret. We didn’t do this in the dark of night or undercover. It was open to the public,” he said. He said the Guyana Airways logo was not copyrighted.

The Deeds and Commercial Registries Authority last month informed the company, through its lawyer, that Guyana

Prior to folding up in 2001 due to deep financial troubles, the then national airline, Guyana Airways Corporation, had operated a fleet of planes that had served the interior communities and international destinations.  Its successor, Guyana Airways 2000 (GA 2000) also went bankrupt and shuttered in 2003