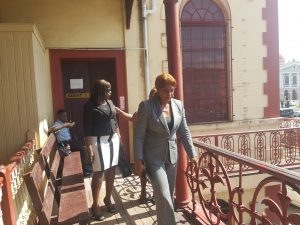 Former Minister of Public Service, Jennifer Westford and her Administrative Assistant Margaret Cummings were Friday afternoon freed from a charge of larceny of GY$639,420,000 by a public officer.

Principal Magistrate, Judy Latchman said the charge of 24 counts of larceny by a public officer was “bad in law” because, according to Guyana’s constitution, Westford, as a government minister, was not a public officer. As a result, she dismissed the charges.

The court found that, based on evidence from several witnesses, that Cummings was a public officer and she collected cash and returned same to Westford.

The Court found that there was evidence that Westford requested the funds by way of 24 memoranda between 2011 and 2015 to conduct conferences, training and social activities in the 10 administrative regions.

Principal Magistrate Latchman pointed out that several officials of the 10 regions either did not recall or did not remember whether such activities had taken place.

Latchman said while several witnesses said they were unaware that the activities were conducted did not mean that they were not held.