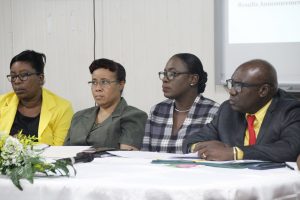 The results of the 2018 Caribbean Secondary Education Certificate (CSEC) examination and the Caribbean Advanced Proficiency Examination (CAPE) were released Friday and it was revealed that Guyana has recorded improved performances in Mathematics and English, the Ministry of Education said in a statement

The details of the performance of the nation’s children were announced today by Minister of Education, Nicolette Henry at the National Centre for Education Resource Development (NCERD).

According to Chief Education Officer, Mr. Marcel Hutson, all of Guyana’s children are gifted and it is the responsibility of the Ministry of Education to tap into those talents using the required methodology.

He said that there is a sense of greater passion within the Ministry which is being generated through collaboration with teachers, students and parents who have been working assiduously to ensure that there is movement in the education sector.

He said that the Education Sector is not where it needs to be but he assured that systems are in place to take the sector to a place where it can achieve all it has set out to achieve.