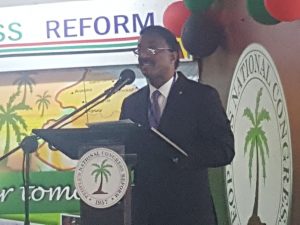 Without naming Joseph Harmon and Volda Lawrence, who were among the hundreds attending the opening of the Congress, Williams warned against outsiders influencing the process.

“Comrades we must be vigilant and there should be no room for dissension and outside interference and influence in our party structure,” he said. 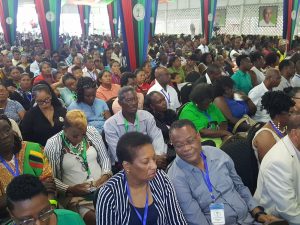 A section of the attendees at the opening of the Biennial Delegates Congress.

Harmon’s chief campaigner, Simona Broomes, sat in the front row bearing a serious expression on her face. She was not among those clapping. Harmon and Lawrence smiled occasionally and President David Granger sat expressionless.

He urged the delegates to elect “our most tested, tried and proven comrades, including with a history of sharing and distributing, to enable us to gain the confidence of the electorate to win the national and regional elections”.

Saying now was not the time to experiment or take chances with another 23 years, Williams said the PNCR has gotten this far because of “strong leadership” which must be passed on to future generations.

He seized the opportunity to tell the delegates, special invitees and supporters that he believed in the PNCR and tgat he has worked under the presidencies of Forbes Burnham, Desmond Hoyte and now Granger. He  alluded to his experience as a young person that there is value in hard work. “Comrades, I believe in the People’s National Congress Reform. I believe in you, and the work you have done for this party,” he said.

The incumbent PNCR Chairman promised to reinvigorate the grassroots ahead of the November 14, 2018 local government elections and the 2020 general elections. “As Chairman, my long-term plan is to put in place a council that would work closely with party chairs throughout the region’s to create a “constituent model” to assist in resolving issues that are affecting our grassroots communities,” he said.

Harmon and Lawrence have been engaged in intensive campaigns across Guyana and overseas, compared to a low-keyed strategy by Williams.

The veteran Guyanese politician earlier Friday said he has been targeting delegates for their support.

Elections are scheduled to be held on Sunday.