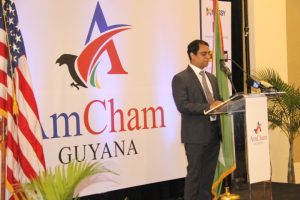 President of American Chamber of Commerce of Guyana, Zulfikar Ally addressing the formal launch of that business organisation.

The newly-established American Chamber of Commerce of Guyana (AmCham Guyana Inc.), which was officially launched Tuesday night, hopes to influence government policies and legislation, in among other areas, those linked to the oil and gas sector.

United States (US) Ambassador, Perry Holloway hailed AmCham-Guyana’s “desire to move forward with relevance and speed” by setting three initial priorities- the Sovereign Wealth Fund (Natural Resource Fund), Petroleum Commission Bill and local content legislation. “These choices are highly relevant and AmCham-Guyana’s focus on these is an early indication of the commitment to be an active stakeholder committed to see growth and development in Guyana,” he said.

President of AMCHAM Guyana, Zulfikar Ally told Demerara Waves Online News that members of the newly-formed business organisation such as Hess and ExxonMobil would be meeting to discuss the Green Paper on the Sovereign Wealth Fund, Petroleum Commission Bill and local content legislation before they are approved. “We don’t want to be left behind in the process of coming after. We want to support the process while it’s still there so given that  the sovereign wealth fund is a topic that is being debated now, we want to bring in internationally recognised experts and add to the discourse and educate at the same time,” he said. 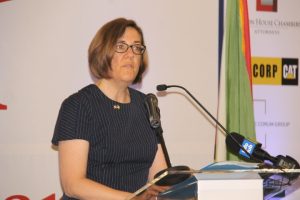 President of the US Chamber of Commerce, Anne Mc Kinney

“We encourage regulatory changes to improve the ease of doing business such as regulations to reduce the amount of time spent in administrative procedures to establish new business and a move towards digital applications,” Ally told top government and private sector officials at the event held at the Marriott Hotel.

With AmCham aiming to promote trade and investment and “take some of the traffic” by prospective investors from the US embassy,  Vice President of the US Chamber of Commerce, Anne Mc Kinney said the American Chamber in Guyana would bring American values in doing business to this South American nation. “AmCham Guyana will allow US companies from diverse industries to bring US practices, corporate citizenship, technology and solutions to contribute to economic prosperity in Guyana, working  in partnership with the government of Guyana and the private sector,” she said.

Mc Kinney echoed Ally’s position on the removal of trade barriers. “The Chamber believes that the United States should strengthen its partnerships in the region and globally working to lower barriers to trade, not to raise them and promoting a rules-based system for trade and investment to drive economic prosperity for all,” he said.

He noted that Guyana’s recent oil discovery positions the nation to be a key  regional and international economic hub. Ally said the local AmCham would promote bilateral trade between American and Guyanese businesses through joint ventures and other partnerships.

AMCHAM plans to collaborate with the Private Sector Commission, Georgetown Chamber of Commerce and Industry, Guyana Manufacturing and Services Association and regional chambers of commerce to find workable solutions.

Ally said the business organisation planned to encourage research and development, transfer of knowledge, job creation, improved productivity, and the manufacture of high quality products at globally competitive prices. He noted that the next two years would see the American Chamber playing a major role in Guyana’s economic development. “In two years hope to see a massive transformation in Guyana economy and AmCham will support businesses trough this transformation,” he said. 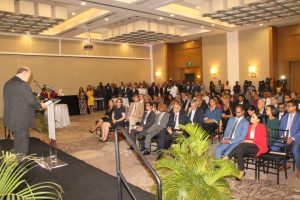 The US Ambassador to Guyana noted that Guyana’s private sector was from June part of the Overseas Security Advisory Council by setting up its own council to focus on, among other things, business and information security and intellectual property rights, yet another good sign for the country’s economy. “What these initiatives indicate is that Guyanese businesses  and entrepreneurs are active in positioning their country to engage successfully in the global business environment,” he said.