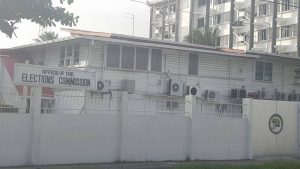 The Guyana Elections Commission (GECOM) on Friday signaled that it might ask the Ministry of Finance for more money to run off Local Government Elections (LGE), but hours later Finance Minister Winston Jordan virtually ruled out giving the elections authority more cash unless the need can be solidly proven.

Jordan, who is a former Budget Director, said GECOM has sufficient money because it was not starting to build the infrastructure from the beginning because it held LGE in 2016, and general elections in 2015 and 2011 from which they would have had left-over materials.

“At the end of the day, we’ll have to have the elections but I’m saying we are going to interrogate the numbers and interrogate the whole process to make certain that we don’t have to put any more money and if we’re forced to give it going to have to be at the barest minimum,” Jordan said when asked by Demerara Waves Online News.

Arguing that GECOM has conducted two elections almost back to back and so must have surplus supplies to avoid returning to  the Treasury for more money, Jordan said if GECOM insisted that more funds were needed then the autonomous agency should be audited.

“Let’s do an audit again… we have poured billions of dollars in those elections, billions in the last national elections and billions more in the last local government election and you can’t suggest to me that stuff, even if they have infrastructure, there are commodity-like stuff, you can’t tell me you are coming back to me for money to buy back those things again and, therefore, something must be wrong,” he said.

He also said the seven-member Elections Commission should question the budgetary estimates and expenditure in a more responsible manner. Jordan said if GECOM has to be given more money, another agency’s budget would have to be slashed.

Government does not plan to take another request for supplementary funds until after the two-month recess ends in October, 2018. According to the Finance Minister, “let them use what they have” until after recess government would consider a request by GECOM then.

Contrary to media reports that GECOM has been allocated GY$2.9 billion to fund LGE, the elections management authority said that figure represents its entire annual budget for 2018. GECOM added that this year’s budget includes GY$160 million for capital works,  GY$1.6 billion for its normal operations and GY$1.2 billion for the conduct of the 2018 LGE.

“This means that the amount currently allocated is believed to be insufficient and GECOM will be engaging the Ministry of Finance to discuss supplemental provisions,” GECOM said in a statement.

The Finance Minister expressed concern that some people believe that there is a vat of cash awaiting requests for supplementary estimates. “People give the impression as if there is a vat of money down there and, therefore, when you ask for a supplementary all I merely have to do is come to Parliament, have it approved and then go and open the VAT and take out the money. You don’t have that; we run a deficit budget,” he said.

When it was suggested to him that he is regarded in some circles as a very conservative spender, Jordan said he did not have a choice in an economy that has a “huge” deficit of five percent of Gross Domestic Product (GDP). “I cannot be anything more than tight-fisted. If I run the country in the way some other places run the country, you will cuss me out…You can call me all kind of names- tight-fisted or whatever- but at the end of the day you have inflation under control, you have prices and various things under control and you don’t have an economy that goes into a tailspin,” said the Western-trained economist.

Jordan added that Finance Ministers are not usually praised but they are expected to go and find the monies so others could be praised. “We don’t look out for praise. This is not a beauty contest. We do what we have to do so when you hear people say ‘go for a supplementary’, they could say that  because they don’t control the nation’s purse. We don’t have no money waiting around,” he said.

Touching again on GECOM again, the Finance Minister said it is time that agency prepare itself for reduced funding from the National Treasury.  “In the case of GECOM, more than any other institution in this country GECOM has been given, virtually every time they ask for money, they have been given the kind of money. It is time that the monies they have been given essentially start reducing as opposed to be increasing,” he said.

He said GECOM was not conducting house-to-house registration and so he could see no need for huge amounts of financing.

GECOM said that now that the date for LGE has been announced as 12th November, 2018, it “will be moving
ahead with the full implementation of all the required activities in keeping with the statutory timelines as enshrined in the Laws of Guyana.