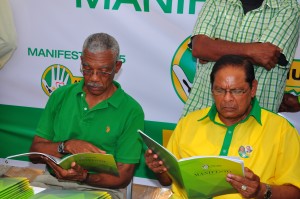 Leader of the Alliance For Change (AFC), Raphael Trotman on Friday said Prime Minister Moses Nagamootoo was not spurned for talks likely to be held between President David Granger and Opposition Leader Bharrat Jagdeo.

Minister of State, Joseph Harmon earlier Friday confirmed that Granger has agreed to lead government’s delegation in the discussions, given Jagdeo’s position that Nagamootoo is a political lightweight who he believed could not make binding decisions for the coalition-led administration.

In welcoming the prospect of “long overdue” high-level political talks , Trotman said the President’s decision to lead government’s side was not interpreted by the AFC as an offense against Nagamootoo. “We don’t believe that Prime Minister Moses Nagamootoo has in anyway been slighted. Knowing him, as I do, he has always been for national dialogue and would have no hesitation in setting aside in the greater interest,” said Trotman.

The AFC leader shrugged off Jagdeo’s concerns that Nagamootoo would have been unable to make key decisions on behalf of the administration led by a coalition between the AFC and Granger’s People’s National Congress Reform-dominated A Partnership for National Unity (APNU). “Of course, because he had been authorised fully by the President to lead our delegation so he would have been able to make binding decisions. There is no doubt about that. I was part of that deliberation and we have no doubt that he had all of the powers to make binding decisions,” Trotman added.

The AFC, he said, was concerned whether Opposition Leader Jagdeo was sincere about holding talks with President Granger because “he has always found a reason not to engage” with the most recent having been last year when he had said that the People’s Progressive Party would not have been cooperating with government. Jagdeo has said that he first has to consult with his party executives to determine whether to go into the talks and whether items such as constitutional reform and governance should be placed on the agenda.

Trotman urged Jagdeo to meet with Granger who is interested in discussing security, environment, and oil and gas.  He said the President would convene the team which is expected to include representatives from the AFC.

Earlier Friday, State Minister Harmon said the President agreed to replace Nagamootoo because “we do not want any hindrances or obstacles to say why we are not meeting”.

The latest stimulus of a renewed opportunity for Jagdeo-Granger talks came last week when Head of the Carter Center, former United States President Jimmy Carter telephone those two top political leaders to ascertain what was the humbug.

Carter’s role in Guyana dates back to 1990 when he brokered a series of electoral reforms with the then People’s National Congress (PNC) administration of President Desmond Hoyte. Those reforms had included the then government giving into demands by the PPP for counting of the votes at the place of poll, fresh house-to-house registration and new structure for the Guyana Elections Commission.