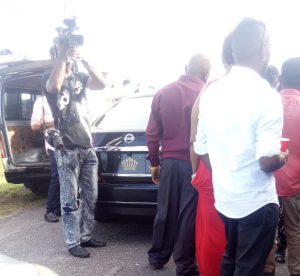 The car bearing the fake presidential Cacique Crown, an imitation of what is affixed to President of Guyana’s State vehicles.

The President of the West Demerara Road Safety Association, who used two fake presidential crowns on a car at a wedding, was charged and fined.

He pleaded not guilty to fraudulent imitation of identification mark,and unregistered ,unlicensed,uncertified and uninsured motor vehicle.

A Vreed-en-Hoop Magistrate ordered him to return to court on August 13 at Leonara.