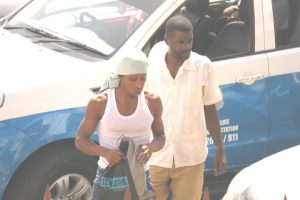 A man was Tuesday arraigned on two counts murder he allegedly committed on a pandit and his son earlier this month.

However, his lawyer said he was framed.

Orlando Douglas is accused of the murder if Onkar Liliah and Deonarine Liliah between 7th and 10th July, 2018 in the furtherance of a robbery.

The stabbed bodies of the Liliahs were discovered by police in their home at Craig Street and Delph Avenue, Campbellville, Georgetown.

Douglas was not required to plea to the indictable offence. Chief Magistrate, Ann Mc Lennan remanded the accused to prison until 31st July, 2018.

Defence Lawyer, Melvin Duke told the Court that the accused was picked out of a crowd of persons who had gathered to witness the removal of the Liliahs bodies.

“He was picked out of a crowd that went to see police remove the bodies ” Duke said. Duke added that Douglas was enticed to make certain statements and there were no tools or weapons recovered from his client.

However, the Police Prosecutor said the accused was arrested with a cellular phone that belonged to one of the dead men.

Sixty- six year old  Deonarine “Dewan” Liliah and his 28-year old son of 25 Craig Street and Delph Avenue, Campbellville., Georgetown were discovered dead after their tenant had not seen them for days and and summoned police.

Police have said video footage shows that an unidentifiable man was seen jumping the western fence and entering and leaving the house through the northern front door with two big bags and a bucket.