Six Venezuelans and a Guyanese pilot were Tuesday taken into custody in connection with an aircraft that authorities believed has fake registration marking. 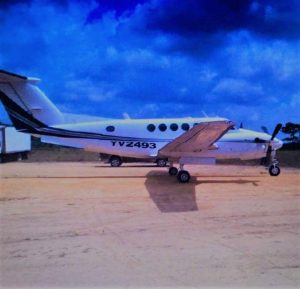 The plane that landed at the Cheddi Jagan International Airport with two Venezuelan pilots and four Venezuelan passengers.

The two Venezuelan pilots and four passengers, two of whom are lawyers, arrived aboard the plane bearing registration YV-2493.

Police said at about 11 AM, Michael Brassington and the four passengers went to Criminal Investigations Department’s Headquarters on their own accord whilst shortly after the two pilots arrived in the company of ranks from the Customs Anti-Narcotics Unit. Police said they learned that the pilots and passengers were invited to Guyana by Brassington who was at the airport to receive them and the “Handling Permission Form “listed Roraima Airways Inc. as the handling agent for the aircraft

“They are in custody assisting with the investigation,” the Guyana Police Force said.

The Guyana Police Force said they believed that registration markings “on the aircraft may be a false one as another aircraft is reportedly carrying the same registration number and further that the Data Plate, which contains vital information about the aircraft, is missing.”

Director-General of the Guyana Civil Aviation Authority Retired Lt.Col. Egbert Field told Demerara Waves Online News that steps were being taken to verify whether or not the registration was bogus.