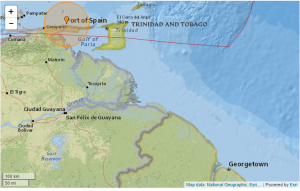 The quake occurred 22 kilometres, North North West of Irapa in Venezuela and also shook Trinidad heavily.  The epicenter was located at 10.764°N   62.627°W and with a depth of 106.3 kilometres.

Other persons reported feeling the tremor in Matthews, Ridge, Kamarang and Baramita in the North West as well as Queenstown on the Essequibo Coast.

There were no immediate reports of damage or injury in any of the affected areas.