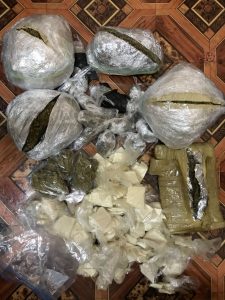 The cocaine and marijuana that police said were found in a  bedroom at the home of Roxanne Carrington in Bartica.

A 59-year old woman, who was allegedly in possession of almost four kilogrammes of marijuana and cocaine, was early Saturday morning arrested.

Members of the Guyana Police Force swooped down on a house at 36 Old Housing Scheme and arrested Roxanne Carrington, a housewife.

Lawmen said they found 2.555 kilogrammes and 1.451 grammes of cocaine in a brown carton and a white bucket was found that were in a bedroom.

Police said Carrington was told of the offence, cautioned and admitted claiming that someone had given her the drugs to keep.

She was arrested and taken to the Bartica Police station where the drugs were weighed.