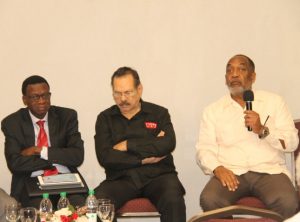 Guyana has been receiving seismic data and verifying the amount of oil being discovered and the wells that are not commercially viable, the Commissioner of the Guyana Geology and Mines Commissioner, Newell Dennison said.

“We are sufficiently competent to see if what they are saying in terms of what has been represented makes sense so there are formulas, for example, that engineers and geophysicists- and we do have engineers here- can apply in, for example, a downhole log, the logs that are generated that come into our possession. They can look at those logs and from the responses on those logs, we can say ‘yes’ or ‘no’…,” he told Demerara Waves Online News. Dennisson said so far Guyanese authorities were satisfied with the declarations being made. “So far, at least from where I sit, we are satisfied with their prognosis,” he  said.

ExxonMobil’s Public and Government Affairs Officer, Kimberly Brasington said,  when asked whether her company provides all of the seismic data to Guyana to allow the country to independently verify the amounts of oil found at each well or if they are not commercially viable, said, “Yes, well data is provided to and reviewed with both the GGMC and the Minister of Natural Resources as well as our partners Hess and Nexen, as required by our agreement”. 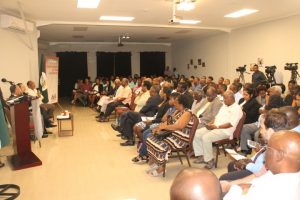 A section of the audience at the University of Guyana-organised 5th Conversation on Law and Society: “Some Economic and Educational Imperatives of the Oil Business” held at Duke Lodge, Kingston, Georgetown on June 21, 2018.

Other industry experts said consortia such as Esso Exploration and Production (Guyana) Limited- ExxonMobil, Hess, Nexen- usually hire independent consultants to independently verify the oil discoveries for each partner. The experts said even if ExxonMobil or any other company does not consider an area economically feasible, when the area is eventually relinquished that does not prevent Guyana from assigning that area to another company that might consider it as having commercial interest.

Those assurances came against the background Chair of Petroleum Engineering at the University of the West Indies’ (UWI) Trinidad campus, Professor Andrew Jupiter saying that Guyana needs  highly trained personnel to interpret the seismic data to determine whether the amounts of oil declared by oil companies are accurate.

“You have to train the best in your country so that you get all the data from that well because…,according to the legislation, all the data belong to the government of the Republic of Guyana so that it means that all the logs that you are on…they will interpret it and you will be able to have an independent calculation,” he told a University of Guyana-organised 5th Conversation on Law and Society: “Some Economic and Educational Imperatives of the Oil Business.”

While Jupiter said Guyana could hire consultants in the interim, he advised that Guyana should be wary of their connections to oil companies.

Former United States Department of Energy (DoE) official,  Dr. Vincent Adams added that Guyanese on-sitewould need “free, unfettered access” as part of a verification system. Accountants, he said, are usually required to be present and operating from the same system as the contractor to have access to the information. “We own that information, not the contractor so the most important thing that we can do is to provide oversight,” he said. Adams stressed that Guyanese personnel would have to be trained as good as or better trained than the contractors’ personnel. “They (Exxon and other oil companies) know that. They operate under those same conditions outside this country and we should expect no less and they are expecting us to do it here. It’s nothing we are dumping on them that they are not used to,” said Adams who is also the Engineer-in-Residence at the University of Guyana.

UWI Professor of Mechanical Engineering, Clement Imbert earlier in the presentation stressed the importance of verification by lawyers, accountants to ensure that “you are getting a fair deal” instead of being told that the country would get the monies to spend on economic diversification.

“You cannot depend on the oil companies to tell you the truth… You have to verify everything that they are telling you so that your State Commissions, the Ministry etc. They have to be well-equipped- human resource, as well as the infrastructure- the laboratories, the testing facilities etc;” said Imbert who was an inspection engineer in the oil industry.

Based on Trinidad and Tobago’s experience in the oil and gas sector, Professor Imbert recommended that Guyana gets the “best deal” in the Production Sharing Agreements (PSA) to include a “substantial contribution” to mainly tertiary education. In apparent reference to heated public criticisms of the Guyana-ExxonMobil PSA, Imbert said there was no time to look back. “Whatever happened in the past, happened in the past and whatever debate that’s going on now, that is irrelevant. The past is the past. Get the best deal you can get now for that,” he said.

The 2016 revised PSA provides for US$3 million of the US$18 to go to training, in addition to an annual pay-out of US$300,000 each for corporate social responsibility, and capacity building. Projections are that Guyana will earn US$380 million annually from royalties alone, plus a year licence fee of US$1 million.

The UWI academic further recommended that governance and regulation be strengthened to Guyana’s benefit with the establishment of laws, regulations and commissions.

Guyana plans to pass legislation to provide for the establishment of a Sovereign Wealth Fund, Petroleum Commission and Local Content. Guyana has been tapping into industry expertise in that regard from The Commonwealth, World Bank, Norway, United States and Canada.