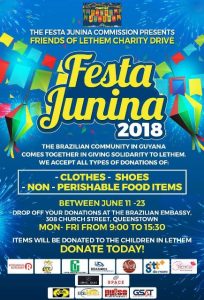 The ‘Friends of Lethem’ charity drive, hosted by the Brazilian Embassy aims to collect shoes, clothes and non-perishable food items that will be donated in Lethem. The embassy is open to receive contributions until June 23.

The festival which is held in Brazil in the month of June dates back 2,000 years to ancient Greece when pagan gods were worshipped in the celebration of the fertility of the earth. The tradition was taken to Brazil by the Portuguese, during the colonial period. Throughout the years the holiday has been influenced by Catholicism and today also honours the Saints Anthony, Saint John and Saint Peter.

Deputy Head of Mission at the Brazilian Embassy, Ronaldo Vieira said “there will be booths with Brazilian traditional drinks and food, such as “caipirinha” and “coxinha”, on sale at reasonable prices and there will be many fun games (some for free) for the kids. Many prizes will be given away as well.” Gates will be opened from 14:00hrs to 18:00hrs for children and 18:00hrs to midnight for adults.