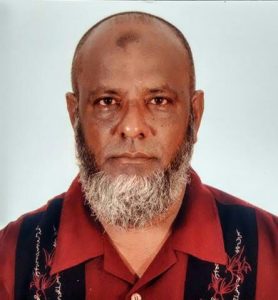 Berbice police have unearth what they believe are the burnt remains of a Corentyne businessman who went missing two months ago and two suspects remained in custody on Saturday, Divisional Commander, Assistant Commissioner, Lyndon Alves said.

“We have what are the charred remains,” he told Demerara Waves Online News. Missing since April 18, 2018 and feared dead is Saeed “Sayo” Hamid of Lot 41 Queenstown, Corriverton, Berbice.

The Divisional Commander said the two suspects, who were arrested on Wednesday, led sleuths to some rubble where the burnt remains were dug up. Alves said investigators have since taken steps to conduct DNA tests to confirm the identity of the man. The mound of burnt material was located near a temple at D’Edward Village, West Bank Berbice.

“The two persons are of interest in the disappearance based on additional information,” Alves said, adding that he was confident that the homicide case would be cracked.

Other police sources, speaking on condition of anonymity, told Demerara Waves Online News that the detainees were previously accused of murder.

Sayo Hamid was said to be a lead witness in his son’s murder trial. Asif Hamid is on remand pending trial for the murder of a businessman at Number 36 Village.