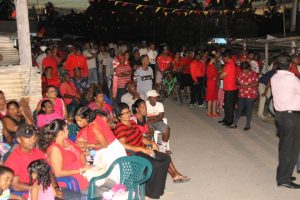 A section of the attendees at the PPP public meeting on June 20, 2018 in honour of the Enmore Martyrs.

General Secretary of the People’s Progressive Party (PPP), Bharrat Jagdeo Wednesday night announced that his party has asked the Guyana Court of Appeal to hear an election petition that has been “languishing” in the High Court since 2015.

Addressing about 400 persons at a PPP-organised meeting in honour of the five sugar workers who were gunned down by colonial police in 1948, he said PPP lawyers have cited a recent Caribbean Court of Justice (CCJ) decision connected to the general elections there.

“In our case in Guyana, we are here languishing here already three years and we are not seeing any movement forward so on this case with the GECOM Chairman, using the precedent in Barbados, we have applied to the Court of Appeal to hear this matter expeditiously because it has impact and a bearing on the elections in the future,” said Jagdeo who is also his country’s Opposition Leader.

Attorney-at-Law, Anil Nandlall told Demerara Waves that the application was filed last week, but no date has been fixed for a hearing.

Jagdeo cited the case in which St. Lucian academic Eddy Ventose, a professor of law at the Cave Hill campus of the University of the West Indies (UWI),  had not been registered to vote in Barbados’ general elections held last month, but was compelled in two days by the CCJ to do so at a hearing held on a Sunday.

The PPP, through one of its parliamentarians- Ganga Persaud- filed an elections petition in June 2015, citing at least 20 reasons why the May 2105 general elections should be declared nullified. Among the grounds were the rejection of valid votes, several statements of poll used by the Guyana Elections Commission (GECOM) and/or the Chief Elections Officer, Keith Lowenfield contained arithmetic errors, multiple voting, voting by persons whose names were not on the voters’ list, and impersonation of voters.

Stating that Guyana’s laws provide for an election petition to be heard continuously, he accused the authorities of  “dragging it out until the end of their term”.

Jagdeo Wednesday night criticised the judiciary, saying its apparent slothfulness was resulting in a loss of public confidence. “They are causing people to lose confidence in a judicial remedy to rig the elections by keeping our elections petition languishing there,” he said. “Our judiciary needs to understand the signal it’s sending to Guyanese and if it does not act in an expeditious manner on these matters- we are not asking for a particular outcome, we are asking for expeditious hearing of these matters but if the judiciary tolerates this sloth then they will be violating, undermining a constitutional remedy to rid flaws from our electoral process,” said Jagdeo who served as President from 1999 to 2011.