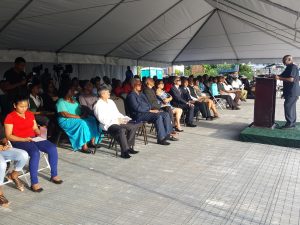 Junior Minister of Labour, Keith Scott on Saturday- Enmore Martyrs Day- appealed for an end to politically divided events to observe the gunning down of the five sugar workers by colonial police 70 years ago, but he ignored concerns that one of the union confederations was not invited to the event.

“Unfortunately, an ugly trend of separation and selfish, narrow one-upmanship have crept into these observances, resulting in one set of individuals pretending to be representing the interests of  the working class, having their own wreath-laying ceremony a few days ago at the graves of the victims,” he said.

Scott said such a childish and divisive behaviour was unlikely to please the fallen sugar workers- Rambarran, Puran, Lallabajee Kissoon, Surujbally and Harry. He said “such divisive conduct must be discouraged at all cost” at a time when government was implementing the Decent Work Agenda.

The GAWU official suggested that FITUG’s exclusion was a form of censure against critics of the government.

It seems from all appearance that FITUG’s exclusion may be related to that organisation’s forthright expression on several matters of national importance. If this is the case , this should heighten our concern as a people and cause us to wonder whether we are heading down back down those dark times when the voices of dissent were not tolerated,” Naraine said.

Scott, in his lengthy address to the gathering, ignored concerns about the absence of FITUG whose affiliates include GAWU, Guyana Labour Union, and the Clerical and Commercial Workers Union appears to be sympathetic to the opposition People’s Progressive Party (PPP). 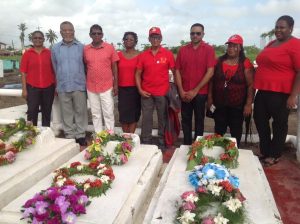 A PPP-organised wreath-laying ceremony at the gravesides of the five sugar workers who were shot dead by colonial police in 1948.

The Junior Labour Minister’s concerns came against the backdrop of GAWU organising its own wreath-laying ceremony at the gravesides of the deceased sugar workers at the Le Repentir Ceremony. The opposition People’s Progressive Party (PPP) is expected to host a rally in honour of the Enmore Martyrs at Roberts Square, Enmore where the party’s General Secretary, Bharrat Jagdeo is expected to address that event.

Prior to the start of the government-organised event held near the Enmore Martyrs monument, a large number of the chairs were unoccupied until the arrival of several youths in minibuses assigned to the Ministry of Social Cohesion.

Hardly anyone from the community of Enmore attended the event at which the Cuban Ambassador, Indian High Commissioner and several ministers of the governments including Noel Holder, Ronald Bulkan, Cathy Hughes and Valerie Garrido-Lowe were present.

The Junior Minister of Labour acknowledged that the 2018 first crop sugar production recorded a “dismal” 34,430 tonnes or a shortfall from 36,105 tonnes, but credited the coalition-led  David Granger administration with right-sizing the sugar industry which has been shrinking since the colonial period when there were 238 plantations in 1839, but dropped to 138 by 1890 and eventually 11 factories with less than 20 cultivations in 1976.

In apparent reference to the fact that the majority of PPP supporters are drawn from East Indians in the sugar belt, the minister said the management of the industry was no longer driven by “emotions” and received preferential prices from Europe. “At the turn of the century, the preferential prices were gradually eliminated, thus forcing Guyana to sell much of its sugar on the world market under less favourable conditions. Rather than taking strong managerial and business decisions to reshape and re-position the industry, they were being guided by emotions and failed to take the necessary action,” he said.

Scott said the state-owned Guyana Sugar Corporation was now saddled with a more than GY$80 billion debt, but government was resuscitating and energizing the sugar industry. “We are  aware that some of the steps we have taken so far may be painful in the initial stages, but be assured that in the final analysis a good life will be available to all concerned,” he said.

He called on the laid off sugar workers to establish cooperatives, something he said the Ministry of Social Protection was willing to lend support.