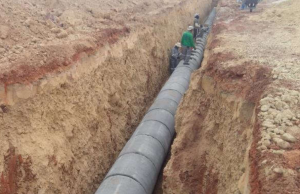 The underground drainage network being constructed as part of a road rehabilitation work in Lethem.

The Department of Public Information said the project, which is being undertaken in two phases, will transform the township into an urban landscape and result in significant benefits to Lethem and Guyana as a whole.

Hinterland Engineer, Jeffrey Walcott explained that the roadway will encompass an asphaltic concrete surface for two northbound and two southbound lanes of 3.5 metres width each.

The roadway will also be equipped with sidewalks, concrete gutter, curbs and for the first time in Guyana, underground concrete drainage tubes and manholes.
“The proposed roadway will have an impressive underground drainage system that is being used in developed countries. The drainage network utilises a system of interconnecting concrete tubes varying in diameters from 400 millimetres  to 1000 millimetres . Manholes will be constructed at intervals to collect water and for inspection purposes,” Walcott was quoted by the Department of Information as saying. 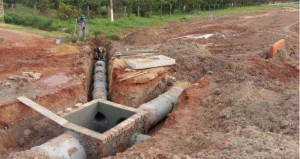 The new underground drainage system will be constructed over the entire 2.4 kilometre roadway. It will utilise concrete tubes of varying sizes which are being used as splines across the road.
Walcott  said those drains, running under the sidewalk, will take the water off the carriageway. They will flow into collector boxes which will then flow along the concrete tubes to the Tabachinga Creek and some into the Takatu River.

To date, the underground drainage is about 85 percent complete. The paving and construction of the carriageway is expected to start in October, weather permitting.

The first phase will see two lanes being paved from the base to the asphalt, with a median, and a sidewalk and the underground drainage. It is expected to finish by the end of September 2018.

Phase one of the work is being executed by JR Ranch Incorporated while phase two will be done by H. Nauth & Sons Civil Engineering Contractors at a cost of $187.8 million  and $76 million  respectively.

Lethem was officially declared a town in October 2017. This project, along with the planned construction/rehabilitation of the Linden-Lethem highway, will significantly reduce travel time between Georgetown and Lethem, thus increasing accessibility into the region.  This upgrade is also expected to bring in foreign currency with the influx of Brazilians.

The project falls under the Urban Roads Budgetary Allocation.