Parking meter contract back at Cabinet 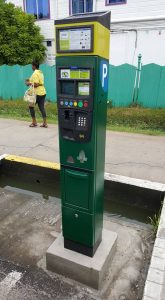 The revised but still controversial parking meter contract is back with Cabinet which has decided to refer the document to a sub-committee, amid ongoing concerns by several sections of Georgetown, Minister of Communities Ronald Bulkan said Saturday.

He said Cabinet on Tuesday- June 12, 2018- decided that a Cabinet sub-committee made of the ministries of communities, finance, legal affairs public infrastructure and business “to further address the concerns that have been submitted” by, among others, the Georgetown Chamber of Industry and Commerce, Guyana Bar Association, Ashton Chase and Associates and sections of government.

Bulkan said the Cabinet sub-committee would review the revised contract to “see if Cabinet is comfortable and all of the concerns that have been expressed are taken into account” in the revised contract. City Councillors had agreed to revise and renegotiate the contract between the Municipal Government and Smart City Solutions.

The Local Government Minister, at the same time, remarked that the sub-committee’s work might automatically collapse if the High Court rules that the metered parking contract should have been offered for public tender. “The argument of the Council in those proceedings has been that it is a concession that has been granted and not a contract for the procurement of goods. The Court will make a determination on that and if it is adverse to the Council, then it may negate the contract and hence any consideration,” he said.

The High Court is likely to hand down its ruling on metered parking in the coming weeks.

Government is not opposed to “the concept” of metered parking in Georgetown to help restore order to the “chaotic streets” but , according to the Minister of Local Government, there are a number of requirements. “There are concerns on the part of  Central government that first and foremost  any rates must not be burdensome, that the contract must be equitable- that the contract must not be disproportionate to the concessionaire, that certain other special considerations are taken on board-namely certain areas will be off-limits to paid parking so these concerns and issues will be carefully considered by that Cabinet sub-committee,” Bulkan said. On January 17, 2018 Councillors agreed that the new rate would be GY$150 per hour or GY$800 per hour.

Asked whether government was concerned about losing votes in Georgetown at the Local Government Elections if metered parking was given the green light again, Bulkan said the revised contract was done with the blessings of the current Council.

The introduction of paid parking has met with stiff resistance from Georgetown’s business community, residents and visitors. Due to the widespread public outcry, government in March, 2017 suspended the parking meter by-laws.

Even after the renegotiation of the contract and eventual approval of the new bylaws by a majority of the Council on April 4, 2018, the Local Government Minister has so far declined to sign the new bylaws into force.

Chairman of the renegotiation team, Councillor Akeem Peter, who is now Deputy Mayor had said the 80-20 stake in the parking meter contract in favour of Smart City Solutions was better because it was based on gross revenues. Peter has also cautioned that the company could put City Hall at a disadvantage if it is calculated on after-tax earnings because expenses could be inflated.