Some retrenched fish processors to be employed by other seafood companies 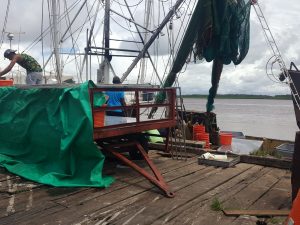 At least 125 of the 300 BEV shrimp processing workers, who will be laid off next month, are likely to be employed by another seafood production company, Head of BEV Processors Inc; Bruce Vieria said Tuesday.

He said if Noble House Seafoods purchases  BEV’s plant and acquires trawlers owned by other persons or gets guaranteed shrimp supplies, that company would need more workers. “I am hoping to get work for them at Noble House and the other plants to try to limit the exposure of them being put on the breadline,” Vieria told Demerara Waves Online News.

BEV will be closing its shrimp processing plant and sending home the workers on July 15, 2018.

Noble House, he said, has already agreed to purchase BEV’s shrimp-processing plant. Noble House Seafoods sources said that company prefers to have its own trawlers rather than depend on other trawlers for supplies. “They are private boats. We are not really into them supplying us a private owners,” the source said.

The BEV Enterprises boss assured that his company has “the best trained workforce” in shrimp-cleaning for the past 34 years and they are “very, very familiar with the process”.

Vieria added that other seafood companies usually need workers and the names of the laid-off workers would be made available should there be vacancies. The seafood processing industry caters for more than 1,000 workers. 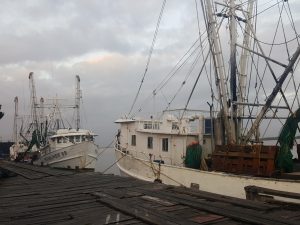 Vieria said when BEV had closed down his fish-processing plant one year ago, none of the workers was out of a job because he had found jobs for them. A number of the workers had been paid severance and reemployed for shrimp processing.

BEV Enterprises also refuted an earlier Demerara Waves Online News report that identified higher taxation was one of the reasons for the closure. “There is no burden. We have very generous taxation arrangements with the government- duty free, tax free- we get export allowances of 75 percent directly,” he said.

BEV Enterprises on Monday officially informed the Guyana Agricultural and General Workers Union (GAWU) of its decision to close operations on July 15, 2018.

Vieria noted that over the years his company has had a very good relationship with workers and they have never reported him to the union.

When the shrimp processing plant is sold, Vieria said he has not made up his mind what he would be using the land for. “I don’t know. I am hoping to do another project later but I’ll have to think about it because, as I said, I don’t want to retire fully but this particular business is a very difficult business and there are so many thing coming down that I don’t have the energy to be on top of it all of the time,” he said.

The BEV Enterprises Inc. top official has already said that neither government nor ExxonMobil has had anything to do with his decision.

Industry sources also said BEV is concerned that a number of the trawler owners do not want to install cameras and other required technologies that are required by the Ministry of Agriculture and importers who have to be abide by international standards. “For us to qualify for outside sustainability certification, we have to put in a whole set of things to be able to continue exporting a couple of years from now and I am not up to those challenges right now,” Vieria confirmed on Monday.

A number of workers have expressed the view that ExxonMobil wants to use the state-owned Guyana Fisheries Limited wharf located at Houston, East Bank Demerara for its expanding oil exploration and production operations in Guyana.

Chief Executive Officer of the National Industrial and Commercial Investments Limited, Horace James on Tuesday told Demerara Waves Online News that government was not considering selling or leasing the wharf for use by the oil sector. He also said that ExxonMobil has not approached NICIL for using that facility.

The wharf is rickety and is a huge risk for pedestrians and vehicles. Many of the wooden planks easily move under the slightest of pressure and there are many holes through which persons feet can slip in.