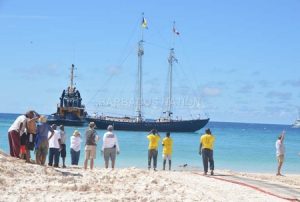 FLASH BACK: A tugboat pulls the SV Ruth out to sea (picture by Jameel Springer)

MY MID-JUNE, the schooner Ruth should be making its maiden voyage to Guyana to purchase the first set of produce and possibly seafood for sale on the local market.

For almost a decade, the massive vessel was a landmark behind the old fish market on Bay Street, St Michael.

“Ruth is in the Shallow Draught and we are actually fixing up and installing some refrigeration. So we are looking at getting refrigerated cargo from Guyana and from Dominica to Barbados,” captain Gerritt Scheper told the DAILY NATION in a telephone interview last week.

“The cargo hold would be able to take refrigerated cargo, fruits and vegetable, maybe even shrimp from Guyana.”

Work was being done on the fibreglass sections of the boat and this would be followed by upgrades to the electrical system. The refurbishment started almost two weeks ago and should be finished by next week.

Scheper said the round trip to Guyana should take about eight days.

At the time, project director and chief executive officer of SV Ruth Ltd, Ian Dash, said it was “designed to bring back inter-regional sail cargo, improve the transport of regional fruits and vegetables, and promote sail cargo regionally, as well as seamanship and sail training”.

But there had been some hiccups.

“The primary problems are Customs and also somewhere to dock Ruth. Unfortunately, there are no facilities in Barbados for sailing yachts. We have been trying to work with some of the people in one of the ministries about getting use of the old Screw Dock on the other side of the Careenage to help rebuild it and become a permanent shipbuilding location in Barbados,” Scheper said.

He expressed hope they would see some progress with the new Barbados Labour Party Government.

But they have not been idle. They assisted with hurricane relief efforts last year after the devastation of Hurricanes Irma and Maria, and have also been training new captains from other Caribbean islands in the various regattas from Antigua, St Kitts and St Barts.

About 24 people have been trained with an eye on getting jobs on yachts and mega yachts. Trainee captains Nazz Alexander from St Lucia and Kaya Wilson from Carriacou have earned awards and honourable mentions.

Ruth was the largest sailing vessel to be launched in Barbados in almost a century. It is a traditional Lunenburg schooner-rigged tall ship with 100 feet on deck and is 120 feet high. (SAT)

2018-06-05
Denis Chabrol
Previous: Hundreds of shrimp processing workers to be laid off
Next: Some retrenched fish processors to be employed by other seafood companies