Patterson objected to Benn’s public statement last month that about 90 percent of GECOM’s staff are Afro-Guyanese, a situation he said was either racist or reflexively racist and could not be confidence booster for the electorate.

The PPP-nominated election commissioners said the Chairman prevented Commissioner Benn from defending his position and when challenged, adjourned the meeting for over half and hour. According to the three commissioners- Benn, Bibi Shadick and Sase Gunraj- they were forced to walk out after Patterson blocked Benn from speaking. “Upon resumption, the Chairman announced that Commissioner Benn would not be recognized and therefore prevented from participating in the remainder of the meeting.  We were therefore forced to walk out of the meeting,” the PPP said.

Commissioner Vincent Alexander, who was nominated by the People’s National Congress Reform several years ago, said the meeting was adjourned because Benn was not letting up. “He didn’t bang the table. He said he didn’t consider what he was doing disruptive, he had a right to speak, he will speak whenever he has to speak.  And, the Chairman said ‘I am chairing and if I am ruling you are not to speak, you are not to speak’,” he said. 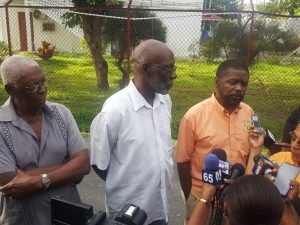 Alexander said the GECOM Chairman challenged Benn to provide the evidence but failed to do so. “The Chairman said ‘you can’t continue like this, going and saying things that are not true and he said he reserves the right'”.

The PPP-nominated election commissioners said Tuesday’s episode was a “blatant attempt to censure and muzzle discussion on critical and important issues at the Commission in general, and in particular contributions on issues regarding ethnic diversity in hiring practices at the Commission.”

Benn, Shadick and Gunraj raised the question of whether a plan was being hatched to out-number them on the seven-member commission whose governing APNU+AFC-leaning commissioners are Alexander, Desmond Trotman and Charles Corbin, along with the Chairman. “We hope that this is not an attempt to alter the delicate balance contemplated by the Constitution in the composition of the Commission,” the PPP-aligned commissioners said.

At a press briefing in the GECOM High Street, Kingston compound, Alexander maintained that race was not a yardstick used to employ persons. Saying that GECOM’s employment criteria has not changed during and after the PPP’s term in office, Alexander said Benn has been challenged to propose a system to address concerns about racially-imbalanced employment practices at the election management authority.

“My only position is that GECOM’s approach to its employment is one of a meritocracy and if you want to change from a meritocracy to something else, then you have to make a concrete, rational proposal to create that change; that has not been done,” he said.

Tuesday’s meeting was expected to discuss the timeline for preparations for local government elections scheduled to be held during the last quarter of 2018.

Against the background of the PPP’s Dr. Roger Luncheon saying that a complaint would be lodged with the Ethnic Relations Commission, Alexander said the Commission would have no problem with that.

He said former Deputy Chief Elections Officer, Vishnu Persaud was among the applicants for that post and those applications were still being processed.

In August, 2017 padlocked office doors greeted Persaud on his arrival for work after his contract had expired.