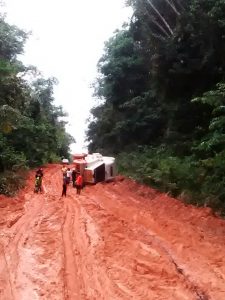 After a prolonged delay in allocating an estimated GY$2.2 billion for repairs to the badly deteriorated Linden-Lethem and Linden to Kwakwani Roads, only minor works could be done until the rainy season ends with the eventual setting aside of GY$650 million, officials said.

Sources said a detailed repairs and maintenance plan had been drawn up for those roads since November, 2017 but the Guyana Geology and Mines Commission (GGMC) took a very long time to approve the monies and sign the contracts.

That plan had included foundation works, cleaning the verges,  digging drains and soak-aways and removing overhanging vegetation to allow more sunlight to reach the ground. Officials, then, had envisaged monthly maintenance instead of four times per year at the end of each rainy season.

“It is a bad situation that could have been avoided because we planned it out properly,” one of the sources said.

Demerara Waves Online News was told that since December 2017, Cabinet approved the release of funds from the Guyana Geology and Mines Commission to repair those major hinterland thoroughfares. Based on a news release from the Ministry of Natural Resources, it was not until May 3, 2018 that six contracts valued at GY$650 million were awarded to  various contractors for the maintenance of the Rockstone-Mabura, Kurupukari-Annai-Lethem and the Linden-Ituni-Kwakwani Roads. That, the ministry said, was in addition to a previous contract awarded to JR Ranch for the Manari Bridge approach realignment in Region 9, Rupununi valued at GY$83,003, 620. 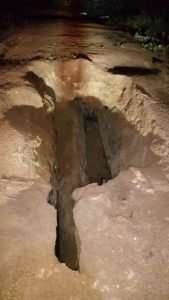 The Ministry added that repairs to the Linden-Ituni- Kwakwani Road, Region 10, would  recommence at the end of the May-June rainy season. The Guyana Geology and Mines Commission through the Ministry of Natural Resources awarded the contracts for the repairs to the road to International Imports and Supplies to the tune of $239.7 million. The contractor has mobilised equipment at site and marking out of the road has commenced.

International Imports and Supplies is owned by Tameshwar Jagmohan.

Also, on May 3, 2018, a contract for GY$139.3 M was awarded to D&R Construction and Machinery Rental for repairs to the Annai to Lethem Road, and another contract for GY$140.4 million was inked with Mekdeci Mining Company (MMC) for work on the Rockstone-Mabura Road

Sources explained that government is not responsible for the maintenance of the Mabura to Kurupukari stretch of the road because that is the responsibility of Demerara Timbers Limited.

Asked what could be done to restrict the transportation of logs on the Linden-Lethem Road during the rainy season, an official said the Ministry of Public Infrastructure could not enforce any law or regulation or introduce weigh stations or toll stations because the road was yet to be gazetted.

A request, sources said, was sent to the relevant government agency since last year for several roads to be gazetted, but only a few have been done so far. 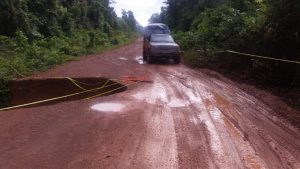 The  Ministry of Natural Resources said the roads were identified following discussions with the Guyana Gold and Diamond Miners Association and several miners and forest operators who had explained that the condition of the roads was hindering their production efforts and costing them more to move supplies in and out of the
interior.

“Ultimately, it is government’s intention to assist miners and foresters to achieve and maintain high yields of production, and as has occured in the past, the intervention became necessary,” the Ministry of Natural Resources said.