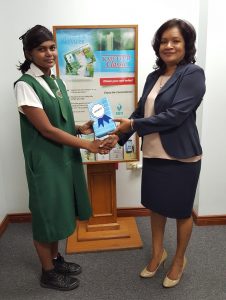 The Guyana Bank for Trade and Industry (GBTI) has said it continues to promote savings especially among youths, and gives an incentive to those already doing so to encourage others to join the bank;s Early Savers Club.

“GBTI continues to promote savings. The bank believes that an early start to good saving habits could influence a good lifestyle,” the bank said in a statement.

The financial institution explained that every year, the Bank awards three Customers from its Early Savers Account Club “in a bid to encourage them and others to continue practising good savings habits.”

The winners are selected from new and active customers depositing GY$1,000 or more every year. 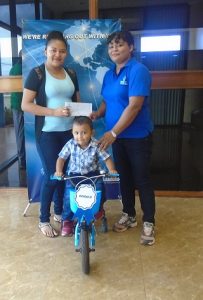 Budnie won a tricycle while the other two winners received tablets.

The GBTI Early Savers Club has many benefits for members. Their savings account starts with a minimum balance of $1,000 and has an attractive interest rate. Every year the Bank recognises eligible Members who have successfully completed the National Grade Six Assessment and submitted an entry for the Bursary Award, the bank added.

Parents of Early Savers Club members can enjoy a 0.50% reduction in loan rates to purchase educational items and pay school and tuition fees.

An early saver is gifted a free ATM card on their 12 th Birthday and they pay no ATM transaction charges and can withdraw up to $15,000 per day. Special discount packages at several local merchants also form part of the package
benefits. 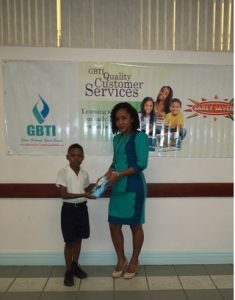 Additionally, every year, the Bank organises a one week summer programme for Early Savers Club Members.