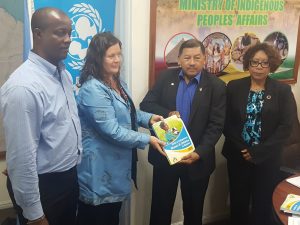 Although Guyana has the single largest number of Indigenous Indians in Latin America and the Caribbean, a recent United Nations-sponsored study has found they are doing poorly in the areas of birth registration and accessing secondary education compared to national averages.

Guyana’s indigenous population is about 76,000.

The study on Indigenous Women and Children, which was officially handed over by Representative of the United Nations Children’s Fund (UNICEF) in Guyana, Sylvie Fouet to the Ministers of Indigenous People’s Affairs, finds that 20 percent of Indigenous Indians do not have birth certificates compared to about 10 or 11 percent for the entire country.

“It is not that you don’t want to register but maybe you don’t have the people on spot. The process to register is not there or you register and you don’t have it back,” she said of the UNICEF-Guyana study, the first of its kind in Latin America and the Caribbean. The study notes that the 2014 Multiple Indicator Cluster Survey shows that 21 percent of Indigenous children younger than five years old were not registered, and those who were registered never collected their birth certificates.

Touching on access to secondary education, the UNICEF official noted that in the rest of Guyana, 7 or 8 out of 10 children transition from primary to secondary schools in contrast to 5 out of 10 in Indigenous communities.

“You can see then they don’t have the same opportunity,” she said.

Main factors influencing school attendance and students’ permanence in school, the study finds, are lack of schools-mainly secondary, in the hinterlands and difficult access to them; financial situation of families resulting in adolescents working early in low-skill jobs; lack of jobs at the local level that require academic qualifications, causing them to drop out and seek menial jobs outside their villages mainly in logging and mining; schools’ curricula that are tailored for urban settings, and teenage pregnancy that pushes many adolescents out of school.

Qualitative and quantitative data were gathered from more than 1,000 persons from among the nine Indigenous Peoples including their village leaders, religious and community leaders, academics, government officials, adolescents as well as community observations.

Minister of Indigenous People’s Affairs, Vice President Sidney Allicock says due to the ease with which the Indians traverse the Guyana-Venezuela border, has seen a number of them registering in that Spanish-speaking nation.

Junior Minister of Indigenous People’s Affairs, Valerie Garrido-Lowe reiterated that the Ministry of Citizenship has been spearheading registration of births in Indigenous communities.

The ministers said follow-up work is being done by the various ministries and regional councils as part of a plan of action, and that the study would arm them to execute programmes effectively. “For us to be able to give support to these communities, we need the facts and this document is such a document that we need,” Allicock said in referring to the study.

Vice President Allicock said government would encourage the Indigenous Communities, National Toshaos Council and the wider public. He said it was possible that the study would help to influence amendments to the Amerindian Act so that the law could be strengthened.