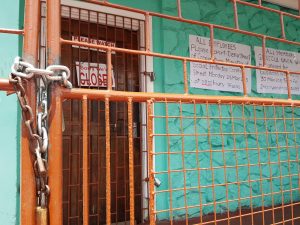 LOCKED: The Guyana Public Service Cooperative Credit Union’s gate and door locked, along with notices posted on the wall.

The Guyana Public Service Co-operative Credit Union Ltd (GPSCCU) on Monday rejected government’s decision to take over the financial institution because it is being poorly managed and it owes the ministry almost GY$50 million in waivers dating back 2002.

Credit Union Chairwoman, Patricia Went said said the Chief Cooperative Officer at the Ministry of Social Protection’s Department of Labour, Perlina Gifth last week Friday seized the offices on Hadfield Street, Newburg, Georgetown, padlocked the gates and security guards deployed after the union demanded Minister Keith Scott put his latest position at a meeting in writing. “Instead of getting a reply, we get padlocks put on the gate….Well, the situation this morning is that everybody get locked out. The gates are locked, there are notices on the building. They even put out our guards that we had,”  said Went. By way of a notice posted on the credit union’s building, staff were asked to report to the Department of Cooperatives on Monday at 9 AM. Members were told that the Credit Union would be opened for business on Wednesday, May 30, 2018.

Board member. Dawn Gardener  wants Senior Minister of Social Protection, Amna Ally or President David Granger to intervene in having the issue resolved.

The GY$49.6 million demand by Chief Cooperative Officer dates back to January 27, 2017 after her department did a reconciliation of the Credit Union’s status for contributions to the fund.

Went told a news conference that there was no investigation into the affairs of that union to support claims of unsatisfactory performance, but said the authorities were merely pressuring the financial cooperative to pay an “undue payment” of GY$49.6 million to the Audit and Supervision Fund from 2002 to 2013.

Gifth could not be reached at her office by telephone for clarifications.

However, Went said the claim of outstanding payments to that fund”could not be justified given that the already audited accounts of the credit union” for 2002 to 2010 reflected no such balance. She challenged the legitimacy of the claim, dating back to 16 years ago. “To claim payments to the Audit and Supervision Fund way back to 2002 we are saying it’s not legitimate because we would have AGM between 2002 and 2010, the reports would have been approved, dividends would have been paid to members, and to bring back now in fold, to put a claim to that period, we are saying that that is unjust,” she said

Vice Chairwoman, Vera Naughton said if the Credit Union pays GY$50 million to the government, that would have an impact on its ability to pay dividends to shareholders. “Obviously our members wills suffer and this what we don’t want….To just take fifty million like if you are throwing it into a dark hole, no we can’t do that,” she said. 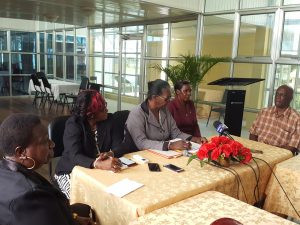 Chairwoman of the The Guyana Public Service Cooperative Credit Union, Patricia Went (centre) flanked by other board members of that micro-financing institution.

The Credit Union said waivers granted by then Minister of Labour, Dr. Nankishore Gopaul was still in effect, and he has also written to the authorities confirming that he had allowed such waivers. Went explained that the monies were spent on the credit union’s education and development such as local and overseas training, and outreaches across the country.

Went said the Cooperatives Department was contending that the waivers should have been signed by Gopaul, “but the ministry is not acknowledging it”.

Went accused the Chief Cooperative Officer of blocking the holding of Annual General Meetings (AGM) because she has been holding on to the audited financial statements for 2002 to 2013. “To date, the statements have not been released by her to trigger the much-delayed AGM,” the Chairwoman added.

The Credit Union officials declined to immediately say how much money the financial institution has in its bank account.

The Ministry of Social Protection stated that “Rather than adhering to the advice and promptings of the Ministry, the Credit Union Management remained adamant and numb to the members’ pleas while select members of the Management Committee continued to enjoy unjustified benefits at the expense of the members. The Ministry of Social Protection has decided that the time has come for a restoration of the dignity for which the Credit Union was previously known, hence the decisions of the CCDO (Chief Cooperatives Development Office).