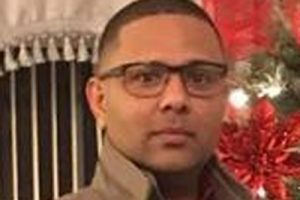 Guyanese police now have two suspects in custody in connection with the gruesome killing of a senior official of the Canadian-owned Guyana Goldfields/Aurora Gold Mines, police sources said.

Dead is 42-year old Neil Whyte, a Supply Chain Manager at the Guyana Goldfields Inc. and of Suite 1608-141 Adelaide Street, West Toronto, Ontario, Canada. He was found naked with several stab wounds about his body in the company’s apartment building on Thomas Street, Georgetown.

Whyte’s Canada-based husband has since arrived in Guyana to witness the autopsy, after which one or both of the suspects would be charged.

Investigators have impounded a car they believed was used by the second suspect of Middle Road, La Penitence to transport the killer from nearby the crime scene on Thomas Street,  Georgetown. He was not at home at the time, and police arrested him at Giftland Mall, Liliendaal, East Coast Demerara on Wednesday night.

Investigators said first suspect was easily identified because he is a former employee of the mining company and is known to the company’s security. The 25-year old man, who was a guest of the victim, was arrested hours later at Vryheid Village, West Canje, Berbice and was up to Thursday still in police custody.