Guyana prepares to assist Cuba in probe of deadly aircrash 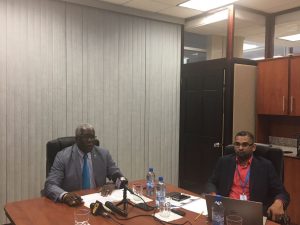 The Guyana Civil Aviation Authority (GCAA) is preparing to assist Cuba with any information about the crashed Boeing 737-200 jet that was banned by Guyanese authorities more than one year ago, officials said.

GCAA’s Acting Director General, Saheed Sulaman told Demerara Waves Online News that the regulatory agency was already in contact with the Ministry of Foreign Affairs to facilitate the dispatch of information to the Cuban authorities.

Expressing “deepest condolences” to the surviving relatives and friends of the 110 persons who perished, he said the “GCAA stands ready to supply any pertinent information it has init possession to assist the Cuban authorities through the requisite diplomatic channels in place, through the Ministry of Foreign Affairs”.

Guyana’s involvement potentially dates back to April 2017 when the GCAA was forced to ban the plane that was flying the Cuba-Guyana route for EasySky.  The aircraft bore registration markings XA-UHZ.

After workers, who were at that time extending the runway at the Cheddi Jagan International Airport, had witnessed the plane struggling to clear the runway on liftoff, GCAA demanded that plane’s flight data recorder and sent it to Miami, United States.

Substantive GCAA Director General has told reporters that the tests conducted by experts had shown that the engines had been under-performing. “Once we looked at the data on the spreadsheet, it was clear that the engines were under performing and that there were issues of overloading of planes.

They did not keep proper log sheets and technical records and we had complained to the company which had oversight in Honduras but we decided to act before they had even got back to us properly. The operation was unsafe and I acted in the interest of safety,” Fields told reporters last week.

The GCAA expects the US to ask for information because the plane was made by Boeing.  Cuba has so far not requested any information from the Guyanese regulatory agency.

The Boeing 737-200, operating on Cubana de Aviación flight 972 from Havana to Holguín, Cuba, crashed shortly after takeoff. The aircraft came down in vegetation near a railway outside the airport, broke up and burst into flames.

The aircraft was owned and operated by Mexican airline Damojh Aerolíneas, operating as Global Air, on behalf of Cubana.