Granger’s concerns about “sections of the media” raise red flags 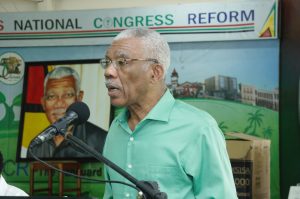 David Granger, Leader of the People’s National Congress Reform (PNCR)- the biggest party in the governing coalition- has raised concerns about sections of the media, triggering a warning of a government crackdown on media that report critically of the now three-year old administration.

The Editors-in-Chief of the privately-owned Stabroek News and Kaieteur News newspapers have also expressed some concern about President David Granger’s remarks concerning the impact of the media on the coalition.

Anand Persaud of the Stabroek News called on the President to clarify his concerns about the media so that they could be properly addressed especially in the context of the sedition clause in the Cyber Crime Bill that raised worry about “any attempt to cut down free speech”. “There should be a clear explanation from the President of what he believes are the challenges so that those could be answered by the media houses that he citing because we would like to know clearly what are those things that he finds challenging because those he finds challenges could actually be things that the media have a legitimate right to investigate and expose and to detect,” Persaud told Demerara Waves Online News.

The Kaieteur News’ Adam Harris said it would be “rather unfortunate” for the President if he does not believe that any government is subjected to media scrutiny. Defending his paper’s stance on the ExxonMobil  2016 agreement, Harris said it’s comments and reportage on that deal as well as allegations of kick-backs from out-of-court multi-million dollar settlements. “No government will ever get a clear walk-through. It’s always subject to scrutiny…and that’s expected in any part of the world,” Harris said.

Political Science Professor, David Hinds acknowledged that sections of the media have not been friendly to the media in recent times, but he said government could not expect journalism practitioners to ignore unnecessary mistakes being made. “Unfortunately, the government has made some basic errors of judgement that any responsible media must report and critique,” he told Demerara Waves Online News.

He recommended that government overhaul its media strategy to get better coverage for some of the good things that it has been doing. “Unfortunately for government, routine government actions do not amount to news. The government has to package those as big policy to catch the attention of the media,” he said.

Hinds, who is also an executive member of the Working People’s Alliance (WPA) which is part of the Granger-led coalition administration, suggested that he would not be surprised that signs of growing concern about media reports could result in an assault on the press as had been the case by the PNC administration during its rule in the 1970s to 1980s and the People’s Progressive Party (PPP) from the 1990s to 2015.

“My fear is that this narrative of a hostile media could lead the government to crackdown on the media. We have been down that road before under the PNC and PPP governments. And elements in this government have already shown intolerance for criticism. So, I would urge the calmer minds to try to stem the tide of alienation,” said Hinds who, along with trade unionist Lincoln Lewis, was removed as a columnist from the government-controlled Guyana Chronicle newspaper.

For the Stabroek News, that newspaper prefers to take the Guyanese leader’s concerns at face value today because President Granger did not have much to do with the PNC in that period. “I’d like to take that on face-value and to hear clearly from this new PNC what exactly their concerns are because, of course, going back to their previous period in government, they were a whole range of different concerns. I would like to hear from this President as to media criticisms and how open they are and so that line in the PNC release- I am not sure it was well thought out and really they needed to have some explication of it,” Persaud said.

Harris, who worked with the PNC’s newspaper- New Nation- and the government-controlled Guyana Chronicle, disagreed that a crackdown on sections of the media was likely. “I am not worried about that. As a matter of fact, I don’t think it is in Granger to silence the media, himself being a journalist. What I think you will find is the normal grumbling…Every single government has been reacting to the media because they put them under scrutiny,” said Harris.

The Political Scientist’s reaction came against the background of PNC Leader Granger, who is also Guyana’s President, raising concerns at his party’s General Council last weekend about unnamed sections of the media. “Mr. Granger also spoke of the many achievements of the Government. He also highlighted the daily challenges faced by the Coalition from some sections of the media,” the PNC said in a statement after the meeting by the Council, the second highest decision-making forum by that party. PNC Chairman, Basil Williams, according to that party statement, also raised concerns about information he said was being peddled by the opposition. “Mr. Williams said that party members must be prepared to put up with the resistance and seek information that will equip them to rebut the lies and fabrications of the opposition. The Chairman said that the task of members is to stand up and defend the Party, the Government and the Coalition,” the PNC said.

Hinds countered, saying that those media outfits that have raised Granger’s concerns were not always hostile to the government, but had played a major role in sensitizing the society to the ills of the previous government that in the long run benefitted the coalition. At least two of the media houses that are now unfriendly to the government, were actually openly supportive of parties within the Coalition,” he said.

The President and his government, he said, should ask why some of the media have become very cozy with anti-government forces. Hinds said government should share some of the blame for the type of media coverage it has been receiving instead of seeing itself as the victim. “I think the government, by its aloofness, the arrogance of some ministers, bad decisions, and its handling of the sate-owned media, has alienated sections of both groups. So, I don’t think the government is a victim as the president’s remarks seem to suggest,” he said.

Noting that the President has been very supportive of journalists, Hinds said the media is an oversight institution which has a 24-hour presence, Hinds advised that “any sensible government would not want to alienate the
media”. He further advised that a government crackdown on privately-owned media would not help the administration because most Guyanese get their news from such outfits instead of the government-funded and controlled radio, television and newspapers. “Government supporters don’t get their news and opinions from the state-owned media. So, they need the independent media to reach their own supporters. Ultimately news outlets gather and sell news and opinions. If the government constantly makes mistakes, they will report those and spin them as part of an editorial policy. If the government does transformative things, I am sure the media would sell that,” he said.

The PNC rule from 1964 to 1992 had been characterised by government control of the media through no liberalisation of the radio broadcasting spectrum, restrictions on the importation of newsprint for newspapers that had been critical of the government and the murder of Catholic Standard photographer, Father Bernard Darke.

After Forbes Burnham died, his successor, Desmond Hoyte, paved the way for the establishment of the independent Stabroek News newspaper with some American funding.

The absence of private radio had continued into the PPP-led administration until 2011 when then President Bharrat Jagdeo granted several radio licences to persons he had perceived to have favoured. During the Jagdeo-led administration, the privately-owned CNS-TV Channel 6 had been close twice, and HBTV Channel Nine once.

Jagdeo had also banned then Capitol News journalist, Gordon Moseley from State House and the Office of the President because of a report on the then Guyanese leader’s meeting with Guyanese in Antigua. Jagdeo had also repeated called independent journalists “opposition media”, “carrion crows” and “vultures”. His administration had also banned government advertisements in the privately-owned Stabroek News newspapers, and had lifted the ban only after the start-up of the Guyana Times newspaper whose principals include his friend, Dr. Ranjisinghi ‘Bobby’ Ramroop.