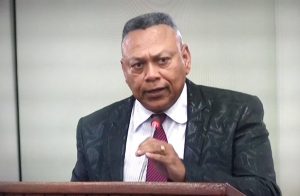 PARAMARIBO – The Surinamese government came under attack in parliament Thursday for the way authorities here handled the recent deadly assault on several fishing boats offshore Suriname, before parliamentarians unanimously passed a motion to deal with the incident and the welfare of the largely Guyanese  fishing community.

After a stinging debate by both sides eventually, the motion supported by opposition and coalition was adopted by 38 votes in favor and 0 against by the National Assembly.

In the motion, the government is being urged, among other things, to investigate all the facts and bring the perpetrators to justice with the necessary international cooperation and, in cooperation with Guyana, to look into possibilities for adequate care and support for the relatives and victims and how to offer medical, psychological and practical help and partial financial compensation.

Parliament also called for actions to engage with the Guyanese authorities in order to facilitate administrative processes in Suriname to legalize Guyanese citizens who are currently residing illegally in Suriname. The government is also urged to bring the safety offshore Suriname to an acceptable level immediately in cooperation with thee relevant agencies and to release the necessary funds for this.

Approval of that motion came one day before Guyana’s opposition People’s Progressive Party is due to lay a motion in the National Assembly on the recent piracy attack.

In the aftermath of the April 27, 2018 attack on 20 fishermen aboard four boats off the eastern coast of Suriname, there are five survivors, three bodies, including one in Guyana, have been found, while 11 are still missing. Surinamese authorities have so far arrested 16 persons while Guyanese police continue to detain one of three persons. The two others have been released on GY$100,000 station bail each.

Legislators from both sides of the isle questioned the government extensively over the pirate attacks on Guyanese fishermen offshore Suriname two Friday’s ago on April 27. Questions ranged from what the government will do to prevent such attacks in the future, what the authorities are doing to assist affected fishermen and their families and how the Guyanese government is cooperating to tackle several issues related to the Guyanese community in Suriname. The local fisheries sector is largely dominated by Guyanese fishermen and boat owners who either reside in Suriname or travel back and fort between Guyana and Suriname. Also operational issues regarding the Coast Guard were raised.

Several MP’s noticed that several months ago then Minister of Agriculture, Animal Husbandry and Fisheries, Soeresh Algoe, informed parliament about several measures that were being put in place to regularize the fishery sector. Algoe, who was replaced by Minister Lekhram Soerdjan in April, told parliamentarians in December last year that by 15 January 2018 all fishing licenses had been expected to be declared invalid and that new licenses would be issued in an effort to organize the license file. Legislators now wanted to know if that had actually happened and how many licenses were in circulation. Coalition MP, Patrick Kensenhuis (NDP), bluntly advised government to retract all issued licenses and provide fishermen with new ones in order to start a completely new registration of individuals and companies involved in the country’s fisheries sector.

Leader of the coalition in parliament André Misiekaba (NDP) noticed 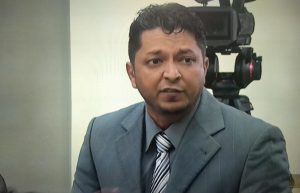 that the recent attacks were not only “barbaric”, but should be qualified as “terrorism”. “I want to know if the government has the same opinion”, said Misiekaba. Especially the approach of the Coast Guard and the alleged response time of the several judicial agencies after the tragedy came under scrutiny. The general opinion was that the Coast Guard did not react promptly after the attacks were reported. Ministers disclosed that since there are no permanent Coast Guard officers on duty and no vessels are standby 24/7 it took some time to mobilize personnel to sail out. According to the government there is also a staff shortage at the Coast Guard. Minister Stephen Tsang said the Coast Guard urgently need money and more troops. The workforce consists of police officers, military personnel and others who are available on call.

Minister of Defence, Ronni Benschop, noted that security is an interest of the entire community. He stated that in the past the naval department of the National Army had successfully carried out coast guard duties together and in the presence of the police. Referring to critical remarks in the past from legislators about the functioning of the Coast Guard, Benschop stated that while the fishing grounds were plundered and atrocities occurred in the sea area, the decision to dismantle the Coast Guard was never taken. “Now we are confronted with the sour fruits. We are way too late, because we have seen the problem coming and we did nothing”, said the minister. He further noted that the Ministry of Defence has now responded to the situation and would ensure that order and peace at sea are restored. Due to the measures taken by the Ministry of Defence, a number of fishing boats are already back at sea, Benschop said. He added, that “we will not leave that area for the time being, we will stay so that the fishermen can fish safely and give us the guarantees that they will continue to contribute to the economy”. In a meeting with fishermen Friday the Defence Minister will inform them when they can go out again at sea safely. According to the minister that could be within a day or two.

Dissatisfied, especially with the response of the Minister of Agriculture, Animal Husbandry and Fisheries, to questions, coalition leader Misiekaba lashed out at the government. He argued that there has been chaos in the fishing industry for decades and that the legislative during the most recent budget debate have offered tools and reached agreements with the government how to address certain issues. “At least you should have presented the state of affairs here and not that general story that we have heard before about regularizing the sector. We can no longer accept that when thirteen people, fourteen people are brutally gunned down at sea, that you come here with general stories. Sorry, you are my government, but we do not accept this”, said Misiekaba.

Guyanese authorities intend to use the Anti-Piracy attack to charge and prosecute anyone culpable in Guyana, although the offence has been committed in Suriname.

The relatives of the persons, whose bodies have been recovered, would have to await DNA tests before they are handed over.