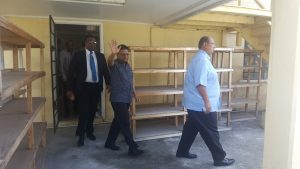 Former Finance Minister, Dr. Ashni Singh (waving) and former NICIL CEO, Winston Brassington (blue shirt-jac) leaving SOCO headquarters to be finger-printed at the headquarters of the Criminal Investigations Department. Behind them is their Attorney-at-Law, Sase Gunraj.

They were questioned for more than four hours by investigators of the Special Organised Crime Unit (SOCU) of the Guyana Police Force in the presence of their lawyers- Anil Nandlall, Sase Gunraj and Mark Waldron.

After the interrogation, Singh and Brassington were taken in a car to the Criminal Investigations Department of the Guyana Police Force where they were finger-printed and subsequently released on GY$300,000 station bail each.

Singh and Brassington are already on GY$6 million bail each by the Magistrates’ Court – GY$2 million on each of three charges of misconduct in public office-in connection with the alleged sale of  three tracts of land valued more than GY$900 million without regard to the valuation process.

Acknowledging that he is a United States (US) resident, Brassington said he never received a summons but returned home to appear in court to answer the three charges. Later he said on acceding to SOCU’s request, he arrived at that law enforcement unit’s Camp Street office and was told that “I am under arrest” for alleged misconduct in public office. “They were going through files. We said it would be unreasonable for us to be able comment on matters and, indeed, they went through twenty-something files and they are taking every instance where the valuation is above the selling price and calling it misconduct in public office… and in the majority of these cases even if we had a public tender,”  Brassington said.

Among the 27 instances, Brassington said, were the sale of lands to SOL fuel company in Linden, in Kingston to Guyana Bank for Trade and Industry, Guyana Stockfeeds, Bel Air Gardens transactions to Ian and Mary Mc Donald, Roraima Group of Companies, Sanata at Industrial Site, Clairan’s, and the sale from one government to another government entity; Twin’s Manufacturing, Hand-in-Hand, National Hardware, Pritipaul Singh Investments.

Brassington said NICIL’s privatisation programme was “distinctly different and better than that under the previous administration under the PNC (People’s National Congress) administration. He denied any wrongdoing in the sale of the many government assets. “We have produced records showing what we did and there is nothing wrong in what we did but these charges which have never been used in Guyana before, they couldn’t find a single statute to say ‘you broke the law’ and misconduct in public office- we are not public officers based on legal cases and the constitution. We didn’t carry out instructions in an improper manner. Everything we did we have a justification and an approval from Boards and Cabinet so it is a travesty in justice,” he said.

Brassington warned that due to “political vindictiveness” Guyanese would punish because investors would be scared to do business in Guyana and professionals would be unwilling to work in a country where they could easily be prosecuted.

Singh, a former Chairman of NICIL- government’s holding company for State assets- told reporters outside SOCU that “consistent with the commitment which we have always given, we continue to cooperate with the authorities in every respect”.  Singh reiterated that the David Granger-led coalition administration was using the coercive arms of the State to target its political opponents. “I would say that what we are witnessing is State bullyism, political harassment of the very worst kind,” he said.

The former Finance Minister said the charges of misconduct in public office for the sale of the East Coast Demerara lands  that were laid against him and Brassington “are completely baseless and every rational observer and commentator has said this repeatedly”. He vowed that he would not bullied, cowed or intimidated by the governing administration, while at the same time adding that “I exited active politics” after the People’s Progressive Party Civic (PPPC) was defeated at the May, 2015 general elections.