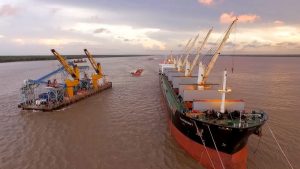 As Oldendorff Carriers, which transships bauxite from RUSAL’s mines in the Upper Berbice River,  prepares to close operations in Guyana in early June if the United States (US) does not soften its sanctions on Russia, the union is preparing to seek compensation for an estimated 200 workers who could be laid off.

Following talks with the Ministry of Natural Resources on Monday, the People’s United and General Workers Union (PUGWU) said Oldendorff has informed government that it would be closing operations by June 5 if there is no major change in US sanctions.

Although PUGWU is the recognised union at Oldendorff since November 2015, the union said management has refused to sign a collective labour agreement and negotiate wages and salaries, raising fears that severed workers would receive meagre compensation without any rights to compel the company to pay up all its dues or its equipment would be seized. The union said it would shortly be submitting a list of the workers and their entitlements to the Ministry of Natural Resources.

“The severance pay, legal requirements point to minimal benefits which the union believes is unacceptable for the workers who faced many challenges under this company. The PU&GWU will propose the package and the ministry has promised their support, with the engagement of all parties,” the union said in a statement.

Noting that the Ministry of Natural Resources has said that other companies were willing to replace Oldendorff, PUGWU asked that current employees of that transshipment company be given first preference. “The union has opted to provide the ministry with information regarding the Oldendorff workers as we advocate for them receiving first preference among these new companies,” the union said.

The union said it also raised concerns that since Oldendorff began operating in Guyana, it has not recorded a profit, a concern the workers’ organisation said the Natural Resources Minister, Raphael Trotman planned to take to Cabinet. RUSAL is the majority shareholder in the Bauxite Company of Guyana Inc. (BCGI), with the Guyana government holding the remaining 10 percent.

The Guyana Bauxite and General Workers Union (GB&GWU), which is the legally recognised trade union that represents BCGI-RUSAL workers, described Monday’s talks with the Minister Trotman and his Junior Minister, Simona Broomes as “frank and cordial”. That union said it recommended that a mini bauxite ‘think-tank’ be established to address the concerns.  “The Union proposed the establishment of an advisory team of competent skills, unique to bauxite, to meet and deliberate on a way forward and urged Government to maintain working relationship with the unions whose members (i.e. the workers) will be affected by the decisions impacting RUSAL/BCGI and Oldendorff. It was noted such engagement would be consistent with Articles 38 and 149C of the Guyana Constitution,” GB&GWU said.

With aluminum prices skyrocketing as a result of the US’ sanctions on RUSAL, the world’s second largest bauxite producer, Washington has since softened its stance on that company and has called for Russian oligarch, Oleg Deripaska, to relinquish control.

The US has also extended the deadline by five months by which time companies doing business with RUSAL will be required to wind down operations.