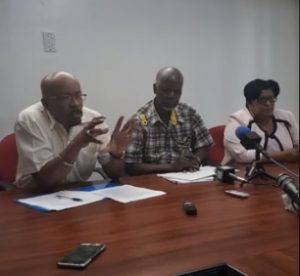 People’s Progressive Party (PPP)-nominated members of the Local Government Commission (LGC) on Friday said their five-month old constitutional body is being starved of cash, but the Permanent Secretary of the Ministry of Communities, Emil Mc Garrel has bluntly rejected claims that the monies were deliberately held back

Mc Garrel said the LGC last year obtained GY$20 million “to a bank account which they have access to” “which they are using right now” and future amounts would be released in  requested tranches when the Ministry of Finance’s  Integrated Financial Management and Information Systems (IFMIS) is ready to process. “The request for this year so far has also been forwarded to Finance and as soon it’s available, they’ll get it. Nothing more than that,” he said.

“There is no issue with respect to making the funds available to them, none whatsoever,” he said.

Bulkan could not be immediately reached to address concerns that he continues to perform some of the commission’s duties.

At a news conference held at the Opposition Leader’s Office on Church Street, the Commissioners- Clinton Collymore, Norman Whittaker and Carol Sooba charged that although monies were budgeted for capital and recurrent expenditure, no money has been released to the body.

Whittaker said GY$110 million- GY$20 million for capital and GY$90 million for recurrent- was still to be deposited into the LGC’s account.

“This was designed to to stymie the work because the Hon Minister Bulkan has been doing some of the work that is supposed to come to the Commission,” Sooba added.

They collectively said that the building located at Eping Avenue, Bel Air Park that they currently rent from the Guyana Bank f0r Trade and Industry (GBTI) does not have sufficient space for sub-committees to meet or meet members of the public and other persons who have grievances.

“Where would the other commissioners be housed for members of the public to come and discuss issues confidentially? However, (LGC Chairman Mortimer Ming)o said no such room was available and if they want they can meet in the Boardroom,” said Sooba, a former Town Clerk who was booted out of office in 2015 by way of a no-confidence motion.

While a Secretary and an Accountant have been hired and steps are being take to recruit a Human Resources Manager, the Commissioners were unclear whether those persons would be paid. “In spite of the attempts to defeat our progress we have been able to move forward though not at the pace we would have wished,” said Whittaker, a former Local Government Commissioner

Whittaker further charged that several letters from the commission to the Minister of Communities have not been answered or acknowledged.