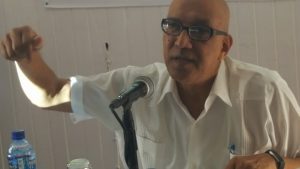 Even as the Guyana Gold Board (GGB) boasts of reducing its deficit and investing a huge amount of cash to strengthen the security of its database and allow miners to register with that regulatory agency on the phone, gold miners were Thursday up in arms over the board’s decision not to refund monies earned from silver.

GGB Chairman, Gabriel Lall noted that his regulatory agency cleared  a GY$14 billion deficit from its Bank of Guyana deficit last year. That deficit was racked up when gold was bought for as much as GY$1,900 per ounce but the price eventually nose-dived. “People who didn’t know the market gambled and left the bag for people like me to fetch,” he said.

Lall noted that the GY$14 billion amounted to a clearance of 75 percent of its overdraft. He said the operating deficit of GY$194 million in 2016 was converted into an operating surplus of more than GY$590 million. However, a “whole set of money” would be spent this year on several initiatives such as linking up with Digicel (Guyana) to allow miners to register with the Gold Board on their cellular phones.

One of the miners complained that the Gold Board was no longer refunding earnings from the sale of silver. Those monies, the miner stressed, were used as a credit facility. “Nobody understands this industry; the silver payments were used by the dealers to cushion the cash-advance that they would give to miners because the gold board is not a lending institution so a dealer would sometimes advance money to a miner because he is in a bad position. He wouldn’t get back all that money. Some of that money is written into the dealer getting that silver payment so the miner was willing at the dealer level to forgo the silver payment,” he said. 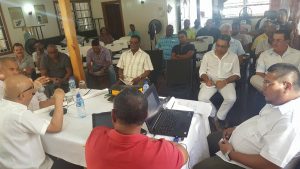 However, Lall pointed out that the Gold Board does not get financial support from the government and so the entity had to find decent ways such as the retention of silver sales and increases in some taxes for self-financing. “We need to be self-sufficient. You have spoken frankly so I have to speak frankly. The Gold Board has to be self-sufficient and I am going to push back on this,” he said.

After the Gold Board Chairman likened the sale of gold, along with silver, to wood and sawdust, a miner bluntly rebuked  him that the gold industry was the richest and chided that, gold can’t be treated like a cake-shop because it is not like wood and sawdust.  “Once you enter this industry with mentality, then every decision you make would be the wrong one,” he said.

The miner questioned what percentage of the cleared GY$14 billion deficit was a result of silver earnings and increased fees and taxes.

Lall, however, noted that the dealers have been telling him that they were not making profits and at the same time have been declining to provide “one piece of paper”.

The Chairman of the Gold Board announced that an agreement has been reached with Digicel to allow miners to register with that regulator. “We think this arrangement with Digicel is the first part of many platforms that would bring us in sync,” he said.

The headquarters of the Guyana Gold Board, Brickdam, Georgetown.

Lall said the Gold Board and the Guyana Geology and Mines Commission need to work closely together, despite resistance in some quarters. He said miners need to be treated properly and promptly and that assays need to be conducted quickly. “You are spending too long and that is source of unhappiness to me and the senior management team,” he said.

He added that Gold Board workers caught engaging in fraud, leaking proprietary information and violating security would be dismissed immediately without room for warning and but provision would be made for due process. “This is one of our trust building and confidence building measures that are in place and will be followed through vigorously,” he added.