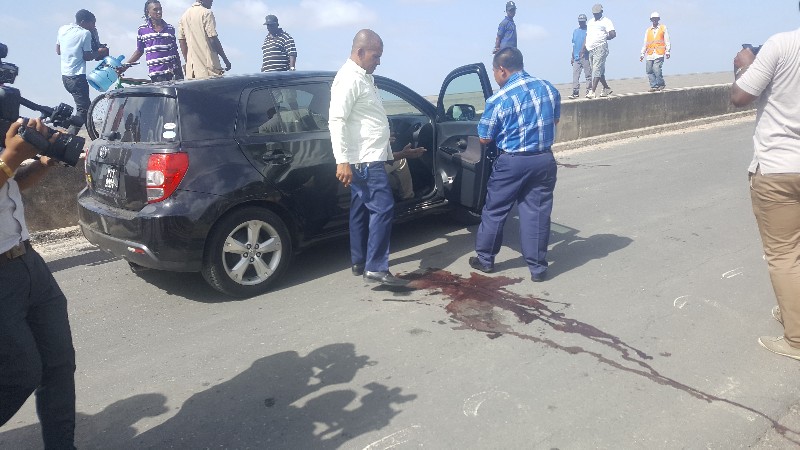 The blood just outside the car shows where one of the suspected bandits was shot dead by police.

Head of the Criminal Investigations Department of the Guyana Police Force, Assistant Police Commissioner, Paul Williams said he was confident that “so far, the police actions were justified” when asked if the suspects were killed justifiably

He said he was unaware whether the suspects were entrapped and lured to the Georgetown Seawall where the shooting occurred. “It is not no entrapment and I don’t know anything as it relates to if anything planned or so forth. Nothing to that effect or no such information to my knowledge,” Williams told Demerara Waves Online News. 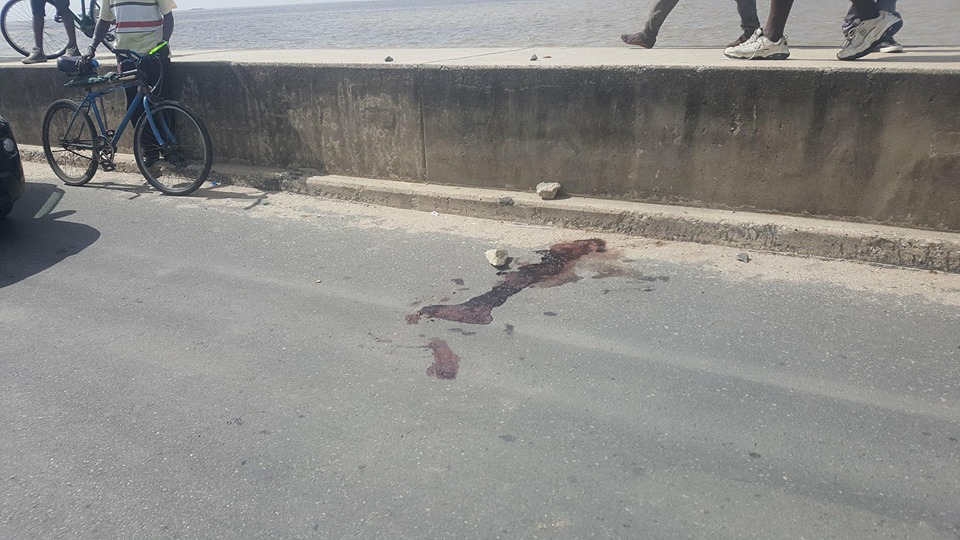 While three persons were killed, only one firearm was recovered and disclosed to the public in a photograph to the public. Police have given an explanation, saying that one of the shooters is a motorcyclist who fled the scene.

Asked how only one gun was recovered and what threat one of the two bandits, who were initially shot dead, posed to the police that resulted in his demise, the Crime Chief said investigations were continuing. “We are still investigating… There is going to be a full report as it relates to that,” he said. He acknowledged that one of the suspects was in possession of the gun, but could not explain how the other man was killed.

Police said initially 46-year old Dextroy “Dutty” Cordis  of Grove, East Bank Demerara and Kwame Assanah of Buxton, East Coast Demerara were killed. A 9 MM Pistol along with a magazine containing seven live rounds and four spent shells was found next to the body of Cordis. Seconds later, by the police account, 57-year old Errol “Dynamite” Adams, a known character of Dartmouth, Essequibo Coast and Buxton, East Coast Demerara was shot dead, while his accomplice escaped on a CG motorcycle that was near the motorcar in which Cordis and Assanah were travelling. The policemen said one of the men on motorcycle fired several rounds at the police who again returned fire, resulting in the death of Adams.

One of the bodies was seen in front of the car, which was facing east, and the other on the right hand side of that vehicle.  He said the gunman and police exchanged fire outside the car. However, no bullet holes were seen on that vehicle because, according to the Crime Chief, “no, because they were outside; the engagement happened outside of the car.” On the other hand, police said the roof and windshield of its anti-crime vehicle were damaged by the gunfire from the suspects.

He said none of the policemen,  who were part of Thursday morning’s operation, was placed under close arrest. The Assistant Commissioner acknowledged that he was not on the ground and was not privy to all of the information, but at the same time he ruled out the possibility of the policemen who confronted the now dead men briefing the media on what transpired.

While the Guyana Police Force often releases the names occupations and addresses of victims of crime, on this occasion that law enforcement agency did not do so. Williams also said it would be “unprofessional” release the name of the bank customer.

Told that the police account of the incident has a lot of loopholes, the Assistant Commissioner of Police said lawmen use force in their own deliberate judgement based on the situation on the ground at the time. “It may appears so but hen it comes to engagement and the use of force, it is not about imagination. When you meet in the real situation and the reality on the ground, then is when you get a true understanding of what happened,” he said.

The Guyana Police Force indicated that the killing of the three men marked somewhat of a breakthrough in clamping down on the robbery of persons shortly after leaving commercial banks with large amounts of cash.