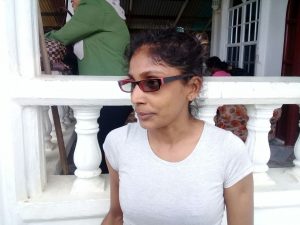 Four armed and masked bandits- one with a gun and others with a knife and cutlasses- Thursday night robbed a  family at Port Mourant, Corentyne, Berbice.

A woman was sexually assaulted and her hus

They carted off  jewellery, one laptop and an undisclosed amount of cash after robbing the occupants and ransacking the home of a family residing at lot 309 Area ‘R’ Ankerville. 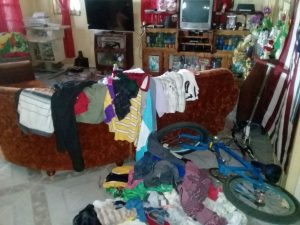 A section of the ransacked dwelling.

Shantie Dudhnath,34, recalled that she was sitting in the living room with her husband, Anthony Dudhnath, her nine year old son and her 63-year old mother-in-law, Yashkanti Dudhnath were all engaged in a conversation and watching television in the living room when the intruders pounced on them, demanding cash and valuable items.

She said they immediately complied with the bandits’ instructions to avoid being injured.

“They tied up my hand and foot, taking off my clothes, while touching my private part. They took my mother-in-law in the room, they knock her and push her on the bed she said. One of them said he just come out of jail and need money” the woman told reporters.

Further explaining, Dudhnath said that her husband was instructed to “put his hands in the air and lie on the ground.” His feet and hands were chopped and he was knocked on his head. At that time the other men were searching the other section of the house.

Demerara Waves Online News understands that the men, since the gate was locked, might have gained access by cutting the eastern mesh fence and used the same point to exit.

A laptop that was being used by her son Sashie Dudhnath was taken away along with jewellery and some cash. When this Demerara Waves Online News arrived on the scene, clothing, other items and documents were seen on the floor which indicated that the home was ransacked.

Police confirmed that since the Thursday evening’s ordeal an investigation was launched. It was reported, too, hat a Police patrol will be visiting the area frequently.

2018-03-16
Denis Chabrol
Previous: Killing of three suspected bandits “justified”, despite several loopholes in police account- Crime Chief
Next: One of the persons killed by police had no brushes with the law- Crime Chief