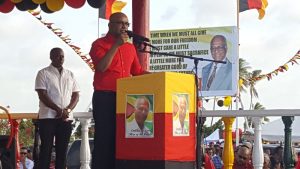 Opposition Leader Bharrat Jagdeo forecasts a 50,000 vote defeat of the governing coalition if more of his People’s Progressive Party supporters are registered and go out to cast their ballots at the next general elections.

Under the proportional representation electoral system, a seat is equivalent to about 5,000 votes. The A Partnership for National Unity+Alliance For Change barely clinched a one-seat majority in the 65-seat National Assembly at the May, 2015 general and regional elections.

Addressing about 2,500 persons at Babu John Port Mourant at an annual event to commemorate the death anniversary of President Dr. Cheddi Jagan, the People’s Progressive Party (PPP) General Secretary said the Alliance For Change would not get any support at the polls, but the People’s National Congress Reform-dominated A Partnership for National Unity would secure 30 to 35 percent of the popular vote.

In that regard, he said the opposition could not be excluded from the management of Guyana’s oil industry. 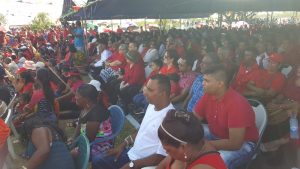 A section of the gathering at the Cheddi Jagan Commemorative event at Babu John, Port Mourant.

He also used the opportunity to promise stipends to thousands of laid off sugar workers, scrapping of Value Added Tax on 46 food items, rolling back of 200 other taxes, reintroduction of potable water subsidy for the elderly and the reintroduction of education grants if the PPP regains office.

Jagdeo, who is Guyana’s longest serving executive president- 1999 to 2011-also pledged to  support campaign financing reform, and constitutional reform. “Whatever people want we will support in the constiution,” he said.

He, however, urged party faithful to “fight to prevent it”. “We are not lying down. We are not taking it as geanted that they will rig the elections, We are looking out for every single method that they will use and we will block those so that the PPP can emerge victorious,” he said.

Jagdeo expressed some dissatisfaction with the turn out in PPP strongholds during the last registration cycle.

So that’s a good sign but we need to step up the work in the next cycle,” he said.

Additionally, he called on party supporters to ensure everyone goes out to vote as well as prevent the coalition from stealing the elections.

He said on February 3, GECOM published one list but on February 6 gace the PPP an old list.

The former Guyanese leader assured Afro-Guyanese that they would be welcome into the PPP’s fold. “Afro Guyaese have a chance to compare and some of them aee comong ave and looking for leasership,” he said.

Jagdeo further promised that if returned to power in 2020, the PPP would use natural gas to add value and operate new sectors.

Among the attendees were top PPP executive members and former sugar workers. About 1,000 of the attendees marched from two points to Babu John.