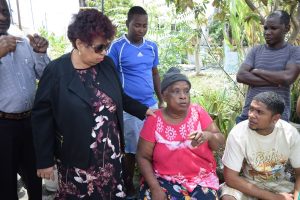 Minister of Social Protection, Amna Ally comforting one of the victims, Janette Browne

An early Wednesday morning fire at Kitty, Georgetown destroyed three houses and left at least 22 persons homeless, and causing government to rush assistance to the victims.

Those homeless are 61-year old Hansraj Manbodh, a pensioner, and five other persons; 69-year old Jeanette Browne and two other persons, and 46-year old Angela Demonick and her three children. About nine persons are estimated to have lived in a now damaged seven-apartment building.

Forty-five year old Oswald Layne, who is a block-maker, told police that at about 3:15 AM, he was in his home at 185 Pike Street, Kitty when he saw smoke in his lower flat apartment as he was going to the toilet. “He raised an alarm and the fire engulfed the entire building and later spread to the other mentioned buildings,” police said.

Meanwhile, the Ministry of Social Protection said it would be providing assistance to the homeless. Minister of Social Protection, Amna Ally, and her junior Minister Keith Scott. She informed the fire-affected families that her ministry would be collaborating with the Guyana Relief Council and other organisations to prepare hampers and other items as well as assist in their rebuilding process.

Ally donated clothing items to the families. One of the victims, 69-year-old Janette Browne said she is now lodging with a neighbour and all that she has left are ‘the clothes on her back’.

The Guyana Fire Service is urging homeowners and others to buy and keep at least one all-purpose fire extinguisher, to fight any initial fires that may occur.

Minister of State Joseph Harmon and Minister within the Ministry of Natural Resources, Simona Broomes also visited and provided comfort to the residents Wednesday morning. Minister Broomes invited some of the victims, a single mother and her children to her home, where she prepared breakfast for them.

On Mashramani Day 2018, fire of unknown origin destroyed a decades-old wooden hotel and several others houses at Victoria Road, Plaisance, East Coast Demerara. About 39 persons are homeless and one is dead as a result of that blaze.